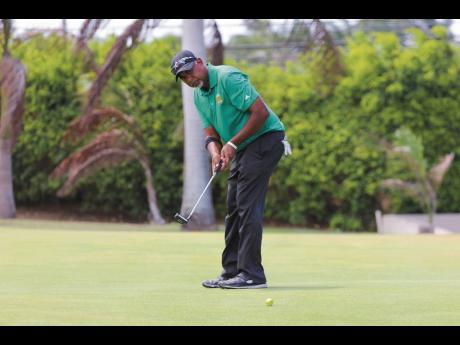 National golfer Sean Morris put in a workmanlike performance over two days to emerge champion of the Jamaica Golf Association Independence Classic, which was held at the Sandals Golf and Country Club.

Playing in the 0-6 category, veteran Morris shot a one-over-par 72 on Sunday’s day two to go with his two-under-par 69 on Saturday’s opening day.

The Montego Bay native’s total of 141 was two shots better than defending champion Romaine Evans, who had a plus-one total of 143.

Evans was the only other golfer to go under par over the two days, shooting 70 in round two to go with his 73 in his opening round. Hoerman Cup representative Dr Mark Nenham finished in the third position following his total of 148.

For Morris, the win was pleasing, having gotten the better of Evans on his home course.

“I was comfy on the first day, I was executing my shots with a fair amount of confidence, as I had been preparing for this tournament. The Sandals golf course has very small greens, which makes it a more difficult track to post good scores, but I had a solid second round as well and it is always good when you get the better of the younger talent who played well.”

Sally Roper took the ladies’ division following rounds of 87 and 93 for a total of 180, while Diane Husdon was second with 181 and Novelette Maestrini 188.

In the junior boys’ category, Tenny Davis shot 87 and 89 for a total of 176 to take top spot, while Sanjay Edwards was second with 181, and Jerome Thomas third with 215.

The Independence Classic is used as a qualifying event for the Jamaica Golf Association.