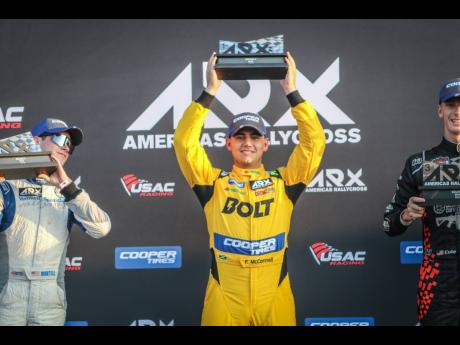 Contributed
Jamaican driver Fraser McConnell lifts his trophy after his success in Round 5 at the Canadian leg of the ARX2 Championship last Saturday.

Jamaican driver Fraser McConnell had to dig deep in an impressive display as he held off his competitors to lengthen his lead in the ARX2 Championship, taking a pair of wins in the official single-specification ARX support category in Canada on the weekend.

McConnell came under heavy pressure from the Dreyer and Reinbold Racing’s driver Conner Martell, who was determined to race McConnell to the finishing line.

The pair of drivers struck a fierce rivalry over the weekend with Martell, who is the reigning ARX2 champion, also grabbing a pair of wins at the ARX of Gateway in rounds three and four.

The Jamaican would, however, flip the script in rounds five and six at the Trois-Rivières street circuit, where he took first place in both races, with Martell being relegated to a close second.

“For sure, he had a lot of pace in him. He was quicker than me earlier today, but I had to up my game and, thankfully, it was enough. A double first-place finish, I couldn’t be happier,” McConnell said after the races. Round Six was particularly exciting for the racers as Martell entered the race with the best qualifying time, but a quick start from McConnell saw the Jamaican quickly gaining the advantage. McConnell had to respond to a strategic fourth-lap joker from Martell but was able to hang on to outpace his opponent down the final stretch.

After the race, McConnell was animated as he pointed to the Jamaican flag plastered on his car and helmet as he gave thanks for the support he has continued to receive.

“This is what I’m doing it for. Everyone that was watching it at home, I couldn’t be more thankful. I love my country and I love my people. That’s why I’m here,” said McConnell.

The series moves on to the ARX of Austin, Texas, on September 28, and the championship weekend Cooper Tires ARX of Mid-Ohio on October 5 and 6 at the Mid-Ohio Sports Car Course in Lexington, Ohio.