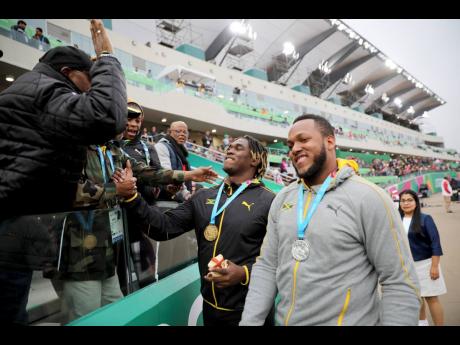 Rodrigo Abd
Jamaica’s Fedrick Dacres is greeted by coaches and fans after receiving his gold medal for the men’s discus throw competition during the Pan American Games in Lima, Peru, Tuesday, August 6, 2019. At right is friend and silver medallist Traves Smikle, also of Jamaica.

National discus throwers Fedrick Dacres and Traves Smikle are quickly establishing themselves as one of track and field’s dynamic duos.

In 2018, they finished one-two in the event at the Commonwealth Games, and on Tuesday they repeated the feat here at the Pan American Games, with Dacres taking gold and Smikle the silver medal.

Both men, who are also roommates at these Games, consider themselves friendly rivals, but attribute a strong bond, which goes back over a decade to their time at Calabar High School for their successes.

“Everything that you see is genuine,” Smikle shared with The Gleaner. “It’s always a fun vibe. One thing with Fedrick is he’s always a jovial person, so it’s good.”

Dacres described Smikle as being like a brother to him.

“We have this rivalry going on,” Dacres said. “We’re four for four, so iron sharpens iron. You can call it that. It’s just a building process for us now. We hope to do better in Doha (at the World Championships next month).”

Dacres revealed that he and Smikle make personal bets between them about their podium finishes.

“Just a few minutes ago (while on the medal podium yesterday), I nudged him and said ‘4-4,’ so we have a little rivalry going on, you know, but it’s nothing serious. It’s all fun and games,” Dacres shared with a big grin.