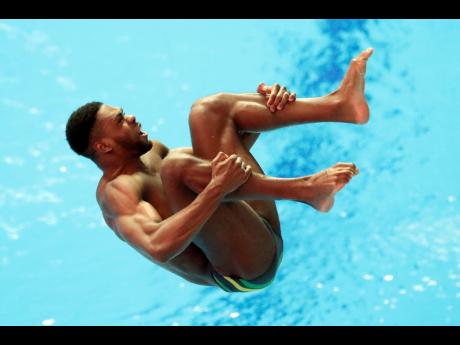 By his expectations, when Yona Knight-Wisdom was asked to grade his Pan American Games campaign out of 10, he gave it a solid eight.

But his eight has brought to fruition the hard work that he has managed to put in throughout both the 1m and 3m events and his technical improvements during the season.

“Eight means I’m extremely happy with the outcome of my events, and that’s not just the final positions, I also mean my attitude, processes during competition, recovery and composure and confidence on each and every dive. Those are all factors I’ve been working on improving this season, and I took another big step to where I want to be,” Knight-Wisdom said.

Knight-Wisdom’s 2019 season can be described as a series of massive steps taken in his career. The 24-year-old made his first FINA World Championship Final after three attempts in the 1m springboard event and finished 10th.

He took his South Korean experience into Peru, where he has produced his best work of the season, culminating in his historic silver medal in the 1m springboard, Jamaica’s first diving medal in the Pan American Games.

He qualified for the 3m springboard final in fifth place and for three rounds in that final, he was in the medal positions. Unfortunately, his fourth and fifth dives amassed low scores, which eventually bumped him from the podium.

But he hopes this experience will energise and fuel him towards taking the biggest step in his career, Olympic qualification, as he looks to follow up his Rio 2016 show.

Yona’s path to Tokyo 2020 will require him to finish in the top 18 during next year’s FINA Diving Cup, and he hopes that the lessons that he has learnt this season will prepare him to chase his ultimate target.

“This year has been one of the biggest learning curves for me. I have understood every lesson that I have been taught this year and improved on it. I just need to continue working on the same things that I’ve been doing and I’m confident I will be in the place I need for the World Cup,” he said.

He may be looking ahead, but he is still basking in his Pan American success, with Jamaicans sending him multitudes of congratulations on his performance, including the Minster of Sport Olivia Grange and Prime Minister Andrew Holness.

Knight-Wisdom hopes that the support he has garnered will continue and that his performances will inspire potential Jamaican divers to also excel.

“I think the best way I can inspire people to follow me is by continuing to do the best I can in my own career.

The more support I receive, the better I can do, and the better I do, the more I can inspire,” Knight-Wisdom said.