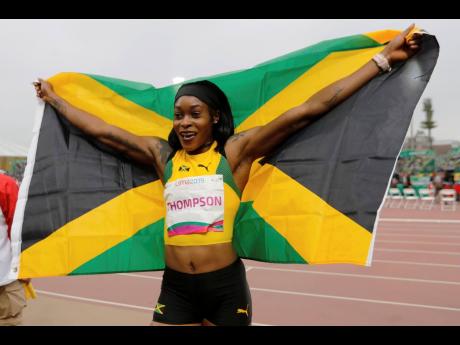 Fernando Llano
Elaine Thompson of Jamaica celebrates after winning the gold medal in the women’s 100m final during the athletics at the Pan American Games in Lima, Peru, Wednesday, August 7. 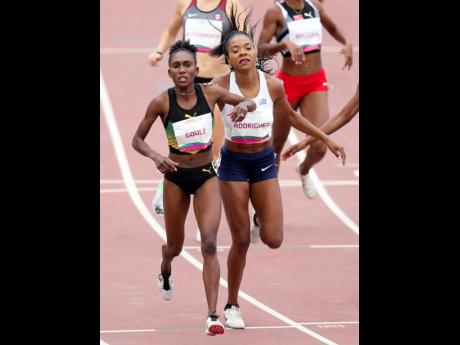 Martin Mejia
Natoya Goule of Jamaica (left) and Deborah Rodriguez of Uruguay finish first and third in the women’s 800m final at the Pan American Games in Lima, Peru, yesterday.
1
2

Thompson took victory in her debut 100m final at the Pan Am Games here at the Videna Sports Village yesterday with a time of 11.18 seconds, ahead of Trinidad and Tobago’s Michelle-Lee Ahye (11.27) and Vitória Cristina Rosa (11.30), who were second and third-respectively. Her teammate Natasha Morrison was sixth in 11.40 seconds.

“I’m feeling great,” she said after the race. “It was cold. I know everyone out there was cold, but I just came out and used it as preparation for the (IAAF) World Championships.

“It’s my first Pan Am, first medal, I’m grateful. Yesterday was Independence Day. To raise my flag today and to hear the national anthem, I’m really proud and appreciative.”

Thompson’s name appearing on the Jamaica Athletics Administrative Association’s Pan Am Games teams list surprised many, who thought she would not have seen the event as high enough on her priority list to attend, but she says that she had no issue showing up as it helps her prepare for the World Championships in Doha, Qatar, next month.

“It’s my first time (here),” she said. “There’s nothing wrong for a high-profile athlete like myself to be here to represent my country and myself, getting races and the preparation for the World Championships.”

Thompson said that her performance here is not enough of an indicator of her form right now.

“Honestly, I can’t use this one race to tell where I’m at because it’s not my type of weather and we’re under a lot of training,” she explained. “I can’t use this as a judgement. It’s just one race. It’s my first 100m after Trials, so I have to just use more races to judge where I’m at right now.”

Thompson’s gold was just one of two mined by Jamaica on the day as Natoya Goule kept her promise to herself to become the Pan Am champion in the 800m event. She is the first Jamaican to medal in the event at these Games.

Goule ran a smart race from start to finish and overtook Cuba’s Rose Mary Almanza just after coming off the final curve to win in 2:01.26 minutes. Almanza took the silver in 2:01.64 minutes, while Deborah Rodriguez’s 2:01.66 secured a bronze medal for Uruguay.

Tajae Gayle gave Jamaica its third silver medal at the Games when his jump of 8.17m earned him second, behind Cuba’s Juan Miguel Echevarría, who measured a distance of 8.27m to win the long jump event. Uruguay’s Emiliano Lasa took the bronze with a mark of 7.87m. Adrian Riley was eighth with a jump of 7.57m. Rasheed Dwyer contested the men’s 100m final but finished fifth in 10.32 seconds. That race was won by USA’s Mike Rodgers (10.09), with Brazil’s Paulo André Camilo de Oliveira (10.16) second, and Antigua and Barbuda’s Cejhae Greene (10.23) third.

Defending champion O’Dayne Richards could only muster a best throw of 20.07m for fifth, and Ashinia Miller’s 19.17m placed him eighth in the men’s shot put.

Megan Tapper and Yanique Thompson both earned spots in today’s 100m hurdlers final through contrasting results. Thompson, coming off an injury in the voided 100m hurdles final at the National Championships last June, powered her way to victory in her semi-final in a time of 12.90 seconds while Tapper was third in 13.10.

Tapper was both surprised about and disappointed in her performance but said she’s backing herself to get it right for gold today.

“I wasn’t expecting that, but I have time to regroup and come again,” Tapper said with a smile yesterday. “Sometimes you have good races, sometimes you have bad races. That was one of the bad ones, but God is in control. He’s faithful and I’m just going out there tomorrow (today), whole different mindset, whole different ball game and try to do my very best and make Jamaica proud.”

Today also sees the start of the men’s and women’s 200m event, with Jamaican favourite Shelly-Ann Fraser-Pryce down to compete, having switched her entry from the 100m. Jamaica’s medal count now stands at eight, consisting of three gold, three silver, and two bronze.