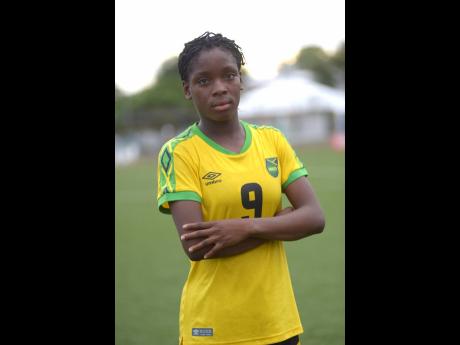 The Jamaica U-14 Reggae Girlz have been on a good run of form in the Caribbean Football Union (CFU) Girls’ U-14 Challenge Series, after winning their two opening fixtures. Today, they will be seeking to finish the group in fine form when they take on Bermuda at 4 p.m.

After edging Martinique 3-2 on Monday and humbling the free-scoring Dominican Republic 4-2 on Wednesday, the young Reggae Girlz will be hoping to snatch their third win in a row against Bermuda.

With the Bermudans having already lost their fixture to Dominican Republic 5-1, the Jamaicans will enter the fixture as the favourites.

The Girlz will be hoping that their striker, the young Natoya Atkinson, will be on her usual prolific form to ensure the win.

An eye for goals

Atkinson, who has been garnering media attention for her eye for goals, has been steadily making her name after an impressive season for Denham Town High girls’ football team when she scored 39 goals in the season, including one in the final against champions Excelsior High.

This feat, Atkinson said, is the reason for her call-up to the national youth team.

“Scoring the 39 goals for my school, it prepared me a lot for this. If I hadn’t scored the 39 goals, then the Jamaica U-14 national team wouldn’t have seen me,” said Atkinson.

The striker has continued her goal-scoring form when she netted a hat-trick against Martinique in the first match and a solitary strike on Wednesday against the Dominican Republic to make it four goals in two matches.

Atkinson said that she believes she will be scoring in today’s match against Bermuda and is optimistic about scoring another hat-trick.

“Yeah, I think I can score. I want to score in the next match and maybe I can score a next hat-trick, too,” she admitted.

The young striker, who hopes to follow in the footsteps and play alongside her senior Khadija ‘Bunny’ Shaw, will be at the helm of Jamaica’s attack and has the support of her coach, Dexter Gillmore.

“She’s absolutely dynamite,” Gillmore exclaimed. “You’ve seen her play. She has pace, she has ability on the ball, she’s creative and she’s smart. That’s the attributes of a striker. She’s a top striker.”

Atkinson will not be working alone, however, and will be depending on the skillful plays from her teammate Tiny Seaton, who is usually deployed down the flanks and the link with captain Dannique Wilson to provide the passes.

The group finishes today with Dominican Republic playing Martinique at 2:00 p.m. and Jamaica facing Bermuda at 4:00 p.m. at the UWI/JFF Horace Burrell Centre of Excellence.