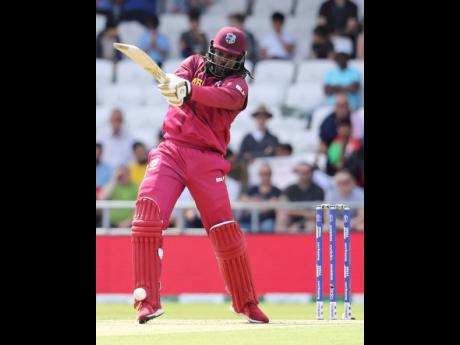 Veteran Chris Gayle’s wait to become West Indies’ leading run-scorer in One-Day Internationals continued after he was dismissed cheaply, but it was persistent rain which snatched the headlines, forcing the abandonment of the opening ODI against India here yesterday.

The weather, which delayed the start by an hour and then resulted in another 25-minute break after 34 balls, returned at 1:42 pm to douse the Guyana National Stadium and force match officials to scrap the encounter, with conditions showing no signs of improvement.

When the rains arrived, West Indies were cruising at 54 for one, with left-handed opener Evin Lewis going great guns on 40 off 36 deliveries after striking two fours and three sixes.

He was partnered by Shai Hope unbeaten on six.

The signs were ominous from the outset when heavy early morning rain delayed the toss by half-hour before forcing play to begin 30 minutes later, with the game reduced to 43 overs per side.

Asked to bat first, West Indies had crawled to nine without loss in the sixth over when the inclement weather returned at 11:55 am to halt play.

The contest was then reduced to 40 overs, but an attempted restart at 12:20 p.m. was then scuppered after umpires expressed concerns over a wet spot near the bowlers’ run-up, forcing mopping operations to be extended.

When play finally resumed 50 minutes later, the affair had been further reduced to 34 overs per side, and Lewis almost immediately set about the Indian bowling with relish.

He cleared the ropes at square leg in the seventh over with seamer Bhuvneshwar Kumar before taking 15 runs from the next over from left-arm pacer Khaleel Ahmed, courtesy of two leg-side boundaries and a six over mid-wicket.

Gayle was more sedate in contrast, struggling to get the ball away, and his 31-ball labour over, his four runs ended when he lost patience and inside-edged a heave at left-arm spinner Kuldeep Yadav, and was bowled at the start of the 11th over.

However, there was only enough time for 12 more runs in 17 deliveries before the skies opened to end the encounter prematurely.