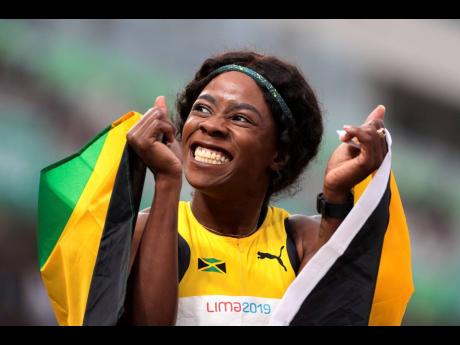 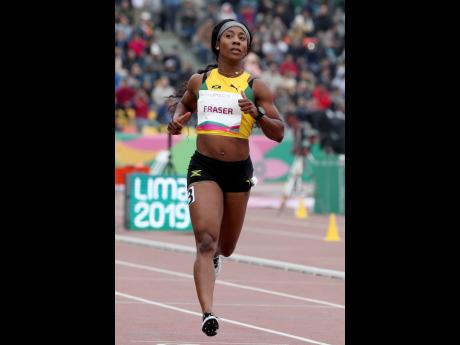 Shericka Jackson impressed, striking gold in the women’s 400m final at the Pan American Games yesterday and as Shelly-Ann Fraser-Pryce gets set to make her assault on the podium today, the star sprinter said that contrary to reports that she made a switch from the 100m to the 200m, the intention was always to do the longer distance.

Fraser-Pryce showed up here yesterday and won her semi-final in a time of 22.90 seconds to comfortably place herself in today’s final inside the Villa Deportiva Nacional Videna.

“Honestly, there was no switch,” Fraser-Pryce told The Gleaner. “I was always scheduled to do the 200m. I don’t know what happened in terms of the registration, but I was always down to compete in the 200m. I was just as shocked as everybody else when I heard there was a switch because as far as I knew, it was always the 200m.”

She said that she had no idea she was to even participate at the Games.

“I didn’t know I was coming here either,” she said. “I was training, and one day my coach was like ‘Oh! We’re going to Pan Am!’ I missed my son’s second birthday, being here, because I didn’t plan on being here. But God is good and every opportunity is an opportunity to improve form and get better. So for me, I’m just excited to be here.”

Yesterday, however, a challenging day for Jamaica’s Rushell Clayton got even more difficult as she had to accept that her silver medal won in the women’s 400m hurdles final was downgraded to bronze.

Clayton, earning her first-ever major senior international medal, ran a time of 55.53 seconds, and had initially been positioned third, but Canada’s Sage Watson, who had crossed the line first, had been initially disqualified, bumping Clayton up to second. However, Watson won her appeal and was given the gold in a season’s best time of 55.16 seconds. It meant USA’s Anna Cockrell, who was moved up to gold with her time of 55.50, fell into second spot, relegating Clayton to the bronze medal. Of the race itself, Clayton, clearly physically exhausted afterwards and complaining of the frigidity of the night at the Videna Sports Village, said it was the hardest race of her life.

“First of all, the condition is nothing that I’m used to and we had to strip down earlier than normal. I tried my best to execute this and the weather and every other thing factors. This is my first senior medal and I am entirely pleased.”

Despite the medal quality change, Jamaica still had a good overall day yesterday, as six of its athletes had podium finishes.

Kimberly Williamson finished third in the women’s high jump final, with a height of 1.84m, behind gold medal winner Levern Spencer of St Lucia, and Antigua and Barbuda’s Priscilla Frederick. Both ladies cleared the bar at 1.87m, but it was Frederick’s season’s best.

Megan Tapper earned bronze with her third-place finish in the women’s 100m hurdles.

Tapper clocked a time of 13.01 seconds, finishing behind Costa Rica’s Andrea Vargas, who won in 12.82 seconds and the USA’s Chanel Brissett, who took the silver in 12.99 seconds. Yanique Thompson was fourth in 13.11 seconds.

Kemar Mowatt was the last to the podium on the day, grabbing a bronze in the men’s 400m hurdles final with a time of 49.09 seconds, behind Brazil’s Alison Alves dos Santos, who won gold in 48.45 and USA’s Amere Lattin, second in 48.98.