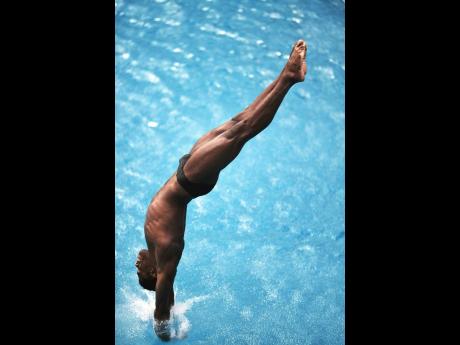 Pan American Games 1m springboard silver medallist Yona-Knight Wisdom gives off an essence of confidence and composure when he takes to the diving board, but he says that for a while in his career, he suffered confidence issues because he didn’t trust his diving.

Although his medal here was claimed in the 1m event, he says his stronger event is the 3m springboard, where he finished fifth in the final. He admits that adding more dives to his range was a difficult decision to make, mentally, because he had doubts about his readiness and worried about public criticisms following possible errors in new manoeuvres.

“I was still a bit scared of some of my dives,” Knight-Wisdom said. “I’d introduced three or so new dives over a few years between 2016 and now. I’d introduced some more difficulty, and in that came a bit of fear in doing them. In that, the fear initially was within me. That developed into embarrassment when I didn’t do them right, because I wanted to prove to people that I could do those dives right. Even though I’m not particularly made for this sport, I’m a tall diver, I wanted to prove to people that I could do these dives right and every time I did it wrong, I felt embarrassed. Should I be doing these dives? Should I be doing something slightly easier That picked up pace in my head and those thoughts became more frequent.”

However, he left long-time coach Adam Smallwood and moved to Scotland. There, he joined the Edinburgh Diving Club and through new coach Jenny Leeming’s drills and pep talks, Knight-Wisdom was able to improve his technique, and from there, his self-belief began to grow.

“I can’t say exactly what it was that flipped that confidence, but I started to feel a bit more trust in it and I was constantly told I can do these dives,” he said. “I started to change the way that I spoke to myself about it. Now that I’m here, when I was on the board, I had no fear about these dives.

“The training type and timing has been perfect with everything, from the intensity of the preseason and pre-competition training and strengthening, and conditioning side of it as well. I feel like I’m in the best condition I’ve ever been in. All of my injuries and niggles throughout my career have not been there as much this time and that’s due to the support staff I’ve had around me since I’ve been up in Edinburgh.”

Knight-Wisdom says that under Leeming, his main goal is to now produce what he describes as “good, consistent diving.”

“I’ve been searching for consistent, confident performances the entire season, and I’ve finally started to achieve that in the last few weeks following the competitions in Guangzhou (China, at the FINA Diving World Series this year). I had a great competition out there in the 1m and just missed out on the semi-final in the 3m, but I came here (to Pan Am), got a silver medal in the 1m and a fifth place in the 3m, but I’m very happy with the overall result.

Knight-Wisdom is pleased with his silver medal in the 1m event, especially since it is not his main event and he only trains for it once a week. For that, he says he is now seeing progress.

He is also looking at positives from the 3m result.

“For my 3m result, the score that I got (437.65), I would’ve gotten a medal (silver) at the last Pan Am Games, but everyone in the diving world has stepped up, so I need to step up even more.”

Knight-Wisdom, who has now departed Peru, will now turn his attention back to the FINA circuit before assessing his plans for next year’s Olympic Games in Tokyo, Japan.