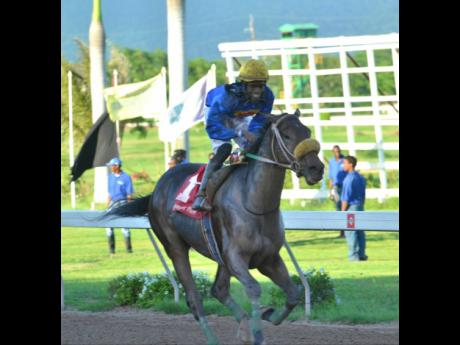 RUN THATCHER RUN and BIGDADDYKOOL should easily put away rivals this afternoon in their respective races at five and 10 furlongs as they prepare for major grade-one events in the last quarter of the season.

Having lost his first race in five starts in the 2000 Guineas, finishing down the track behind SUPREME SOUL, RUN THATCHER RUN returns off a four-month lay-up refreshed and looking spunky in the mornings, beaten by approximately three lengths by STRANGER DANGER at exercise, a six-furlong gallop last Saturday morning.

Facing 11 rivals, RUN THATCHER RUN is among the quicker horses in the line-up and certainly one of the most versatile, having won from five and a half furlongs to a mile. Therefore, any pace that the likes of ADONIS, GOD OF LOVE, FLY FIRST CLASS, or PEKING CRUZ attempts to lay down, RUN THATCHER RUN, who is being prepped for the Caribbean Sprint on October 5, should be able to stalk and outclass – that’s if Omar Walker doesn’t decide to make all.

BIGDADDYKOOL lines up in the Prime Minister’s Stakes, which, sadly, has fallen victim to the grade-one hide-and-seek being played between the country’s top two barns, facilitated by the frequency of races offered at the level, which has only a handful of horses.

Therefore, of the six starters in the Prime Minister’s Stakes, Ian Parsard has sent out SUPERLUMINAL after his tough mile in the Owen Silvera Memorial two weeks ago. Four runners from Anthony Nunes’ barn are in the event – BIGDADDYKOOL, HOUDINI’S MAGIC, DONTAE, and FAYROUZ – both of whom ran last Saturday.

The field is completed by BRUCE WAYNE, now taking orders from Lawrence Freemantle, after racing as a Nunes trainee 17 days earlier in a race won by DYSFUNCTIONAL. A mere 11 days earlier, BRUCE WAYNE had competed as Freemantle-trained in a race very similar in make-up to the Prime Minister’s Trophy, the June 30 Viceroy Trophy, which BIGDADDYKOOL won. This was after racing out of Nunes’ barn all season.

In order for a race not to fall through, the event must have at least six horses from three different barns, a stipulation which, on two occasions, has coincidentally worked out in BIGDADDYKOOL’s favour as he seeks to rack stakes earnings to meet the November 9 Diamond Mile, which he would have missed last year were it not for the withdrawal of stablemate FAYROUZ.

Put BIGDADDYKOOL in the win column against SUPERLUMINAL, his three stablemates and on-again-off-again friend, BRUCE WAYNE.