Orville Higgins | Ricketts isn’t the problem, those around him are 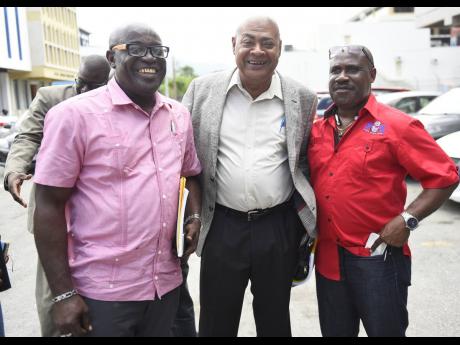 Within a matter of weeks, Michael Ricketts will be sworn in as president of the Jamaica Football Federation (JFF). Much to the chagrin of his detractors, Mr Ricketts was given an enormous vote of confidence by the parish delegates.

Eleven of 13 nominated him, with KSAFA and St Ann opting not to nominate anyone.

Mr Ricketts’ two-year reign was marked by a series of issues that have not gone down well with a wide cross section of the public. The embattled JFF boss has been unfairly raked over the coals for many things, mainly by people who were never in his corner from day one. That said, there are some things that the Ricketts-led administration cannot escape blame for.

Could have been better handled

The public spat with Cedella Marley, the bundling of the travel arrangements for the Reggae Girlz to Scotland, and the visa issue that prevented the national Under-15 team from playing in that tournament in the United States spring readily to mind. Not even Mr Ricketts’ biggest supporters would disagree that these things could have been handled better.

The question is, to what extent does Michael Ricketts, as an individual, deserve blame for these things?

Yes, we know the buck stops with the president, but it is my view that Mr Ricketts has been let down more by his subordinates than incompetence on his part. I accept that this is a thin line. Good leaders have a duty to get the right people in the right positions. Mr Ricketts has the authority to hire, and so, therefore, he ultimately has the call as to who stays and who goes. It is my belief that Mr Ricketts is leaning on some people who have badly let him down.

In his second coming, and now with his own mandate, Mr Ricketts must take a long, hard look at his leadership style. He doesn’t appear to be the type that wants to read the riot act to those who answer to him. For the next four years, that may have to change. Mr Ricketts must realise by now that when things go wrong at the JFF, it is he who will be castigated by the media and the public at large.

For the first part of Captain Horace Burrell”s reign, he was said to be a dictator who micromanaged people. That may not have been ideal, but he generally got things done. I’m not saying Ricketts should rule with an iron fist, but it appears to me that he needs to be a little more hands-on in how he steers the ship.

During the Burrell era (his name is impossible to leave out in JFF leadership issues), he had Horace Reid for a long stretch as his general secretary. Mr Reid’s importance to Burrell’s success cannot be overstated. Mr Reid appeared always to be fully on top of things. The current general secretary, Dalton Wint, is a good man who works hard, but he is no Horace Reid, at least not yet.

For Ricketts to enjoy a less acrimonious time going forward, his general secretary will have to ensure that he is more diligent at dotting the Is and crossing the Ts. My sources at the JFF tell me that two key players in the management set-up are at daggers drawn, and this could be one of the reasons the level of efficiency at the JFF is not what it could be. If this is true, the president has work to do.

Mr Ricketts has some decisions to make. He cannot allow his personal friendships with those who work under him to make him accept substandard work. He must also appear to be less laissez-faire in his leadership style. He does not need to walk around with a big stick, but he must ensure that others do their work – or else!

Orville Higgins is a noted sports commentator and radio personality.