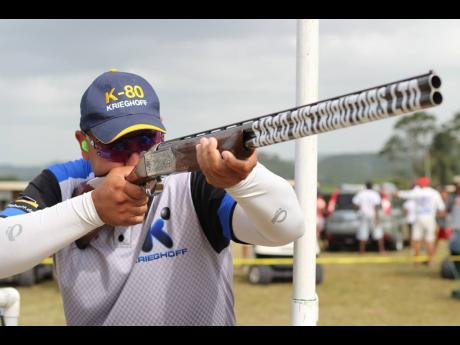 Jamaica’s representatives in Olympic skeet at the Pan American Games, Christian Sasso and Shaun Barnes, said that the competition they faced in Lima, Peru, was on another level.

However, both shooters thought that they represented well, considering that some aspects of the event and equipment were completely different from what they are used to in local, or American, skeet.

But Sasso was happy that he was able to surpass his objective of a 101 score.

“I am very happy how I shot. I had a goal I set with my coach of 101 targets, and I broke 103 out of 125. I am very happy with the scores, especially knowing that we are using guns that are not set up technically for skeet. Plus, there were limitations that we had, and we only had one month to prepare, so considering that, both of us did very well,” said Sasso.

The competition was an eye-opener for both men, who gathered a lot from the experience and are now looking to use the exposure gained to improve their game going forward.

“The experience was surreal, and it let me know the level of competition is so much higher. It was amazing, and I am very grateful because I have never been on such a big stage internationally. We must look forward to enter more international tournaments for skeet with the hope of going to the Olympics,” Sasso reasoned.

Based on the dynamics, Barnes thought they actually overachieved.

“It was our first time competing in it, but it opened up a whole new dynamic because what we are accustomed to shooting is totally different from this event. It showed a different level of professionalism, and it showed how much more disciplined and dedicated Olympic athletes are compared to the level we are at locally.

“My score wasn’t great. I had one or two hiccups that cost me a few targets, but even at my best, I would not have been near the top competitors. The level of dedication and support they get from their country and federation through sponsorship is something we are lacking,” Barnes noted.

However, the pair were grateful for the assistance coach Bianco Rafaelle provided in preparation for the games.

“Without his help, we would be lost, and we had so little time. But he made things so much easier for us,” Sasso said. “We still had a lot of work to do because he (Rafaelle) didn’t have the real chance to work with us, he only touched the surface. So going forward, it will be a lot better working with this coach.”

Both shooters are now highly motivated to become more competitive at this level and will be working towards achieving greater success.