U-19 cricketers return after disappointing spell 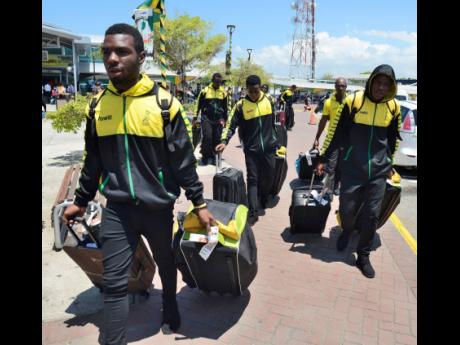 Ian Allen
Members of the Jamaica Under-19 Cricket team arrive at the Norman Manley International Airport from the Regional Under-19 Tournament, which was held in St Vincent and the Grenadines.

It was a disappointed but steadfast contingent of cricketers that returned to the island yesterday, when the Jamaica U-19 cricket team left the Norman Manley International Airport after a disappointing run at the Cricket West Indies (CWI) Regional U-19 competition in St Vincent and the Grenadines.

The team finished second to last in the competition, tallying only 6.6 points after a winless campaign against their Caribbean rivals.

Manager of the team, Gibbs Williams, said that his team was disappointed at the placing, yet explained that the weather had a damaging effect on the team.

He explained that in the game that the team was able to complete, he believed they played remarkably well despite losing to the Trinidadian team by a single run.

“It was a fantastic game where we played exceptionally well but such is the nature of the game. We came up short by one run and I thought that it was more so brilliance on the part of Trinidad rather than lack of application on the part of my players,” said Williams.

Eighteen-year-old fast bowler Andre Blake, who hails from St Elizabeth Technical High, says that while he was grateful for the opportunity to play, he felt short-changed at the amount of playing time the team had.

“I’m disappointed in the performance. We didn’t get to express ourselves as we’d have hoped because of the rain. It stopped us from playing our cricket and we only got two games, and that was not enough,” Blake admitted.

Despite that, he felt he was able to improve his performance in comparison to last year, and hopes to continue improving as he strives for professional cricket.

A silver lining to the competition that Williams sought to highlight was the selection of four cricketers from the team to join the West Indies U-19 training squad in preparation for the ICC U-19 Cricket World Cup in South Africa in 2020, and hopes this can help pave the way for improvement in the local cricketers.