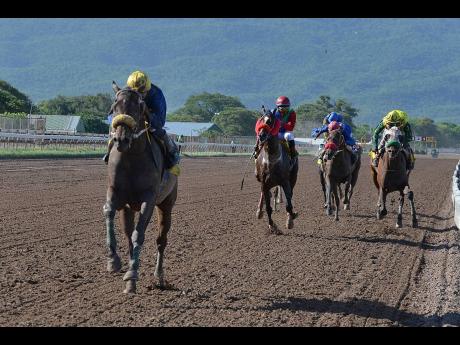 BIGDADDYKOOL easily outclassed a field stacked with his stablemates, dismissing his lone challenger, SUPERLUMINAL, the victim of a relay leg run by HOUDINI’S MAGIC, to romp yesterday’s Prime Minister’s Stakes by six lengths.

Prepping for November’s Diamond Mile, BIGDADDYKOOL swooped down on SUPERLUMINAL and HOUDINI’S MAGIC after the pair battled from the gate to the top of the lane in the 10-furlong event.

Meanwhile, another favourite, Wayne DaCosta’s RUN THATCHER RUN, fell at odds of 1-2 on return from a four-month lay-up, beaten by Philip Feanny’s super-fit GOD OF LOVE, who had disappointed when finishing third last time out.

Forced into stall two by gate handlers after refusing multiple attempts, RUN THATCHER RUN, ridden out of the hole by Omar Walker, was quickly taken on by GOD OF LOVE.

The pair battled to the home turn where 5-1 chance GOD OF LOVE inched ahead and kept moving away to win the overnight allowance event by four and three-quarter lengths in a quick 59.3.

RUN THATCHER RUN stayed on for second, outsped by GOD OF LOVE in his first race since finishing seventh behind SUPREME SOUL in April’s 2000 Guineas, suggesting that he is not yet back to his best form despite looking good at exercise.

GOD OF LOVE completed a two-timer for Feanny, his first being GRAYDON, who chased and took over from SENDAMESSAGETOMAMA three and a half furlongs out and won by a length and three-quarter from SHE’S SYMBOLIC.