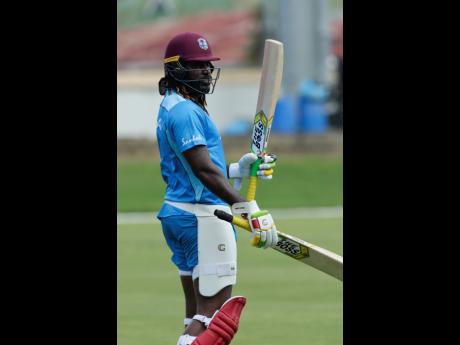 Arnulfo Franco
West Indies’ Chris Gayle holds a couple of bats during a training session ahead of their second One-Day International cricket match against India in Port-of-Spain, Trinidad, yesterday.

Beleaguered West Indies will hope to christen talisman Chris Gayle’s 300th One-Day International with a win when they clash with powerhouse India in their second ODI of the three-match series here today.

The 39-year-old veteran Jamaican sits alongside the iconic Brian Lara on 299 ODIs and will secure the record as his own once he suits up for the contest at Queen’s Park Oval.

Gayle can also overtake Lara’s record for the most one-day runs by a West Indies batsman, requiring just nine runs to overhaul the current mark of 10,405 runs.

“Chris has obviously done as well as he has over the years, and that’s the reason he’s still in the squad,” captain Jason Holder told a media scrum yesterday.

“But 300 games is a lot of games. Some of us sit down and imagine [playing] that many games for West Indies. Hearty congratulations to Chris, and we just hope that he can get us off to a really good start tomorrow.”

And a good start will be key for the Windies if they are to break their recent poor run in ODIs of which has seen them win just six of 20 matches this year.

Since his heavy scoring against England in the Caribbean earlier this year, the left-hander has gathered 246 runs from 10 innings at an average of 27, and his lean returns have hurt West Indies in their quest for large totals.

Holder underscored the importance of the top order, noting that it was critical that they gave themselves time so the middle order could execute.

“I think in the past, we have let ourselves down in having a foundation,” Holder pointed out.

“It is just a matter for us to lay a foundation – take a few more balls up front just to get ourselves set and then we just look to accumulate as the innings goes on.”

Not for the first time, Holder lamented the lack of consistency in his side’s batting. West Indies were superb against England earlier this year, twice setting record totals.

Their batting was hardly recognisable during the World Cup, however, lurching from brilliant to abject, a problem Holder hopes can be corrected over time.

Encouragingly, West Indies have already posted totals in excess of 300 five times this year. However, only twice have they passed the 300-run mark at Queen’s Park Oval – the last time coming 21 years ago.