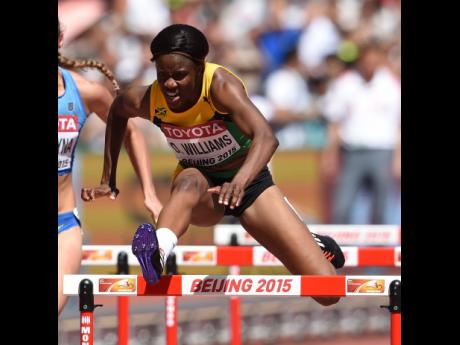 The Jamaica Athletics Administrative Association (JAAA) announced on Thursday that 2015 100m hurdles world champion, Danielle Williams, has been deemed eligible for selection, to the Jamaican team for the IAAF World Championships, which will be held in Doha, Qatar next month.

In a statement issued to the media, the JAAA noted that after "international expert advice" and a review of their selection policy, they felt that the fairest way to proceed is to make its selection decision based on the multiple criteria listed in its published policy, even though the specific scenario is not covered.

The JAAA also said that the 100m hurdles race at the National Senior Championships had been ruled null and void and that Williams' disqualification could, therefore, not stand, given that the race was never completed and had been declared null and void.

After originally noting that a decision would be made on August 16, the association stated that its decision as to who will represent the island in the event in Doha will be made on September 6, which is the closing date for entries for the World Championships.

The release went on to note that the JAAA's main consideration was fairness to all athletes and compliance with both JAAA and IAAF rules.

Williams, the number ranked sprint hurdler this year with a time of 12.32 seconds - the national record in the 100m hurdles, became the centre of a controversial 100m hurdles final at the National Championships. The sprinter was penalised for a false start but refused to leave the track, forcing a lengthy delay. When the event finally went off without Williams, it was again recalled but had to then be called off after several of the participants suffered injury.

The JAAA initially said Williams would not be considered for selection due to her false start.

1. Athletes must compete in the National Championships unless an exemption has been granted by the JAAA.

3.  (a) Subject to the proviso below, athletes placing in the 1st' to 3rd positions in all events will be selected if they have attained the qualifying standard for the event PROVIDED HOWEVER that in any event where any athlete has been granted an exemption from competing in that event at the National Championships under criteria (7) below the athlete so exempted may be considered for selection as an entrant for the event in the competition.

(b) Where an athlete has been granted an exemption and the Selection Committee has determined that such an athlete should be selected among the entrants for the event that athlete shall be selected above the athlete placing third at the National Championships or in place of an athlete finishing in either of the first two places of the event where that athlete has been determined by a medical panel appointed by the JAAA to be ill or injured and not being in a satisfactory physical condition to warrant being entered to compete.

4. Final selection will be made using the allowed final entry date governing the particular competition.

5. All athletes must maintain and prove their competitive fitness up to the time of the final entry date for the competition.

6. Injured athletes must be examined by the JAAA local medical team in order to be declared unfit not to compete in the Championships. After examination the medical team will recommend how soon the athlete will be capable of returning to competition.

7. Athletes who are ranked/listed in the top three in the world for their event who are ill or injured at the time of the National Championships and are granted an exemption from competing at the Championships may still be considered for selection provided that they are able to prove their world ranking form prior to the final submission of the entries for the competition.

Selections are subject to ratification by the Executive Committee of the JAAA.