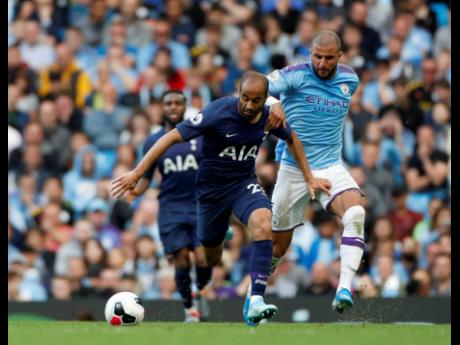 The video assistant referee denied Manchester City another crucial late goal in their latest wild match against Tottenham as the English Premier League champions dropped points for the first time in their title defence.

Gabriel Jesús thought he scored a winning goal in the second minute of injury time at Etihad Stadium only for VAR – new to the league this season – to rule that the ball reached the striker off the hand of Aymeric Laporte as the City defender stretched to head it.

The match finished 2-2, with the final whistle greeted with loud boos inside the ground.

Rewind four months, and almost the exact thing happened to City, that time in a Champions League match against Spurs. On that occasion, Raheem Sterling had a goal disallowed for offside by VAR in the third minute of injury time, denying City a place in the semi-finals.

City manager Pep Guardiola didn’t drop to his knees and look as crestfallen like he did in April, instead engaging in conversation with Tottenham counterpart Mauricio Pochettino in the technical area as confusion reigned around him. Guardiola will wonder how his team didn’t win.

Twice taking the lead in the first half, through Sterling and then Sergio Aguero, City were twice pegged back by Tottenham, first by Erik Lamela and then by Lucas Moura, 14 seconds after he entered the field as a substitute.

The diminutive Brazil winger ran straight toward the penalty area to line up for his team’s corner and rose highest – somewhat improbably – to send a glancing header looping into the net in the 56th.

Aguero was substituted soon after that goal and exchanged some strong words on the sideline with Guardiola as he sat down. The pair was seen embracing near the end of the match, however, suggesting they had patched up their differences.

The result leaves City two points behind Liverpool, the team expected again to be their biggest rival for the title.

A week after scoring the only goal at Newcastle, Aubameyang led Arsenal to a 2-1 win over Burnley with a shot inside the near post from the edge of the area. He was tied as the top scorer last season with Liverpool attackers Mohamed Salah and Sadio Mane.

The standout player for Arsenal, though, was Dani Ceballos, who is on a season-long loan from Real Madrid. He set up both goals – the first was scored by Alexandre Lacazette – and showed the touch and vision Arsenal have been missing since the departure of another Spanish playmaker, Santi Cazorla.