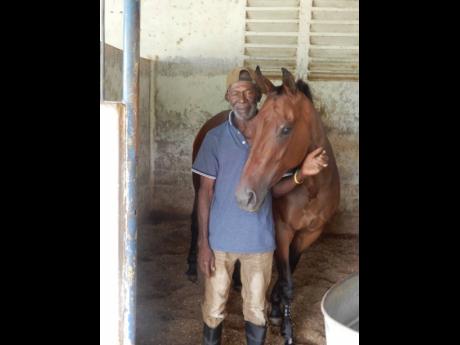 Robert Bailey
Groom Wesley Hewitt pictured with VICTORY TURN, one of the young horses in his care, at the stables at Caymanas Park on Friday.

The last few months have been very difficult for the veteran groom Wesley Hewitt following the death of his wife. Despite this, he said he remains committed to the job.

Yvonne Hewitt, who had been ailing for some time, passed away on June 27 from a heart condition.

“It has been tough,” he said. “When we came to Caymanas Park in 1964, the track was not finished, so we (he and Yvonne) used to pick up stones off it in those days and put into them butter pans.

“She was my best friend and she was my everything, and every time when I look at my phone, I remember her. She was always at home cooking my dinner, and I loved her.

“She was a nice person because she don’t give me any problems at all, and me never give her no problems.”

Their marriage of 40 years produced eight children, but Wesley has nine other children from a previous relationship.

Hewitt, who now plies his trade at the Gary Crawford stables, is a former groom for many-time champion trainer Kenneth Mattis.

He has won over 150 races in his career, with his notable success coming in 1985 when he conditioned D’S LEGEND to victory in the Jamaica Derby for Mattis.

The Westmoreland native says that he has made a good living for his family out of the sport because he has always maintained a high standard of work.

“One time, I tried doing fishing, but I left it because it didn’t work, out, and from there, it is just horse racing all my life,” Hewitt said.

“I have not made a lot of money out of it, but it is just my love for it, and that is what keeps me alive until today because it let me raise my kids and send all 17 of them to school.

“I love them very much, and I look forward to waking up in the mornings to come to work to look after them because I am always here working and doing my best for the horses that I have groomed.

“Is only one time I have ever been sick from I came to Caymanas Park in the ’60s, and that was a long time ago. I have been here every day, and I don’t go home until late night after I water them up and everything.”

The veteran groom, who is currently working with a number of young horses, including VICTORY TURN, who has only raced once in his career, said that despite his age, he plans to carry on working for many years to come.

“If left this and go sit down, then I am going to get sick, so am just going to keep working because I just love the horses them and I love the sport,” he said.