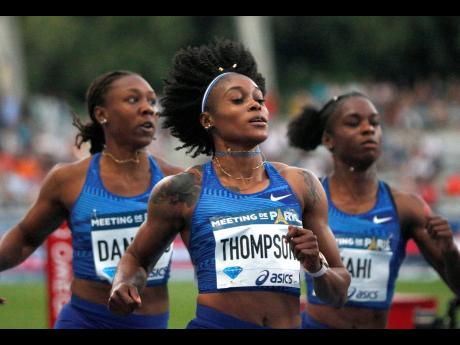 MICHEL SPINGLER
Elaine Thomson of Jamaica (front) on her way to victory in the women’s 100m sprint at the Paris leg of the IAAF Diamond League at Charlety Stadium in Paris, France, yesterday. 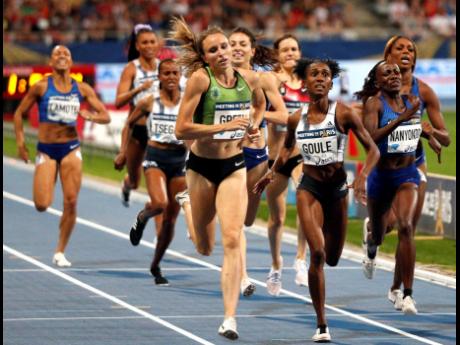 Jamaican athletes continued their good build-up to next month’s IAAF World Championships in Doha, Qatar, after good performances at the Paris leg of the Diamond League yesterday. Elaine Thompson and Stephenie Ann McPherson led the way with wins in their respective events, while there was a top-two finish for Pan American Games 800m champion Natoya Goule.

Thompson, the 2016 double Olympic sprint champion, produced a dominant performance to win the Women’s 100m in fine style. The joint world leader (10.73 seconds) in the event with teammate, Shelly-Ann Fraser-Pryce, Thompson showed her class to win easily in 10.98 seconds, ahead of Marie-Josee Ta Lou of the Ivory Coast, who was second in 11.13 seconds, and Dafne Schippers of the Netherlands, third in 11.15 seconds. Jamaica’s other competitors in the event, Jonielle Smith (11.17) and Natalliah Whyte (11.25), ended sixth and seventh, respectively.

“It was a hard race.” she said. “It’s still five weeks to Doha, so it’s all preparation at this stage. I am feeling great, and I am getting in shape step by step, day by day.”

McPherson, a former winner of the Diamond League Trophy in the Women’s 400m, continued her consistent form in the one-lap event to run on strongly in the final stages for a win yesterday in 51.11 seconds. She picked up eight points to move into the final on 32 points, jointly in first place with Salwa Eid Naser of Bahrain. The United States duo of Kendall Ellis (51.21 seconds) and Shakima Wimbley (51.50) finished second and third behind McPherson.

“It was a pretty tough race (yesterday),” McPherson said after her win. “I put in hard work all week because I am getting ready for Doha, so it was a really hard effort (yesterday). But at the end, it’s a victory, so I’m happy. I beat some of the girls I will race against next month in Doha, so I’m feeling good and confident.”

After a disappointing performance the previous week, where she ran down the track in the Women’s 800m in Birmingham, it was a different Natoya Goule who showed up yesterday in her pet event. Goule ran intelligently as she did not get herself involved in the early stages of the race but timed herself well in the end to finish a close second in 1:58.59 minutes and book her spot for the Diamond League final. The United States’ Hanna Green won the event in 1:58.39 minutes, with Winnie Nanyondo of Uganda third in 1:59.13.

Other Jamaicans competing at the meet yesterday were Shanieka Ricketts, finishing fourth in the women’s triple jump with a distance of 14.71m, ahead of teammate Kimberly Williams, sixth with 14.45m. National champion Ronald Levy was fourth in the Men’s 110m hurdles in 13.22 seconds as United States rookie Daniel Roberts scored a big win in 13.07 seconds.

All attention will now be focused on the Diamond League finals, with the first set for Zurich, Switzerland, this Thursday, and the other in Brussels, Belgium, on September 6.