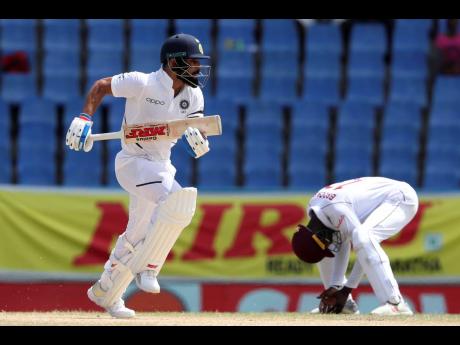 The Windies lacked penetration in the final session and Ajinkya Rahane and captain Virat Kohli capitalised to stroke half-centuries as India strengthened their hold on the opening Test after dominating the exchanges on day three at the Vivian Richards Cricket Ground yesterday.

Rahane, the first-innings top-scorer, finished unbeaten on 53 while Kohli carved out a polished 51, efforts which propelled the visitors to 185 for three at the close – an overall lead of 260 runs heading into today’s penultimate day.

The pair have so far added 104 for the fourth wicket, a stand that pulled India out of trouble at 81 for three before tea and kept the Windies wicket-less in the last session.

Opener KL Rahul struck 38 and Cheteshwar Pujara got 25, but both fell prior to tea as part-time off-spinner Roston Chase (2-69) struck twice to keep the Windies in the contest initially.

The home side had earlier added 33 runs to their overnight 189 for eight before their first innings folded for 222, forty minutes before lunch, conceding a lead of 75 runs.

Captain Jason Holder, resuming the morning on 10, struck 39 as he extended his ninth-wicket stand with Miguel Cummins (0) to 41 as India struggled for the breakthrough.

The right-handed Holder twice drove pacer Jasprit Bumrah for boundaries in the morning’s fourth over before whipping the same bowler over mid-on for another four, a couple of overs later.

He had faced 65 balls and counted five fours when he became the day’s first victim, caught at the wicket flirting with one from seamer Mohammed Shami (2-48).

Miguel Cummins, previously content to simply support Holder, then had a go at left-arm spinner Ravindra Jadeja (2-64) in the next over but missed his heave and was bowled off-stump.

His 45 balls and 95 minutes at the crease put him in the record books for the second-longest innings in Test cricket without scoring.

Left with seven overs to navigate before lunch, India reached the interval safely at 14 without loss, and on resumption, Rahul and Mayank Agarwal (16) pushed the partnership up to 30 before they were separated.

Agarwal was first to go, 25 minutes after lunch, when he got himself in a muddle against Chase and was adjudged lbw after facing 43 balls and counting two fours.

Rahul again promised much in a compact knock that lasted 85 balls and struck four fours as he put on a further 43 for the second wicket with Pujara.

The partnership kept the Windies without success for the remainder of the hour and was beginning to threaten when Chase intervened again, this time bowling Rahul after the right-hander missed a sweep at 73 for two, half-hour before tea.

Seamer Kemar Roach, who bowled superbly without major success, then set back India even further when he breached Pujara’s defence and bowled him nine balls later, with eight runs added.

Kohli and Rahane saw their side to tea at 98 for three and afterwards set about re-establishing India’s dominance in a stand that was more workman-like than commanding.

Rahane has so far faced 140 deliveries and struck three fours while Kohli has counted two boundaries off 111 balls.

Both started slowly, and India went 14 overs without a boundary before Rahane struck fast bowler Gabriel for successive off-side fours in the second over of a new spell.

Rahane was first to his landmark when he collected a single to point off ineffective seamer Miguel Cummins, and Kohli followed him three overs later, notching his 21st half-century in Tests with a dismissive pull to the long-on boundary off the same bowler.