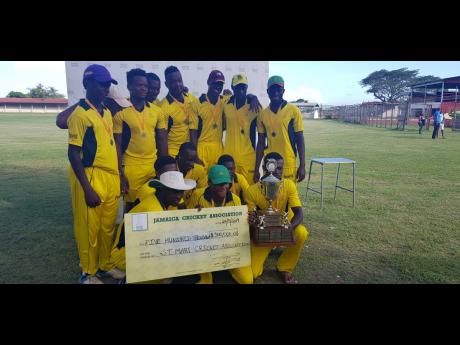 Contributed
St Mary celebrate with their trophy and winners cheque of $500,000 for victory over St Ann in the final of the Jamaica Cricket Association Limited Overs Competition at Chedwin Park, St Catherine, yesterday.

St Mary crowned themselves champions after getting the better of St Ann in the final of the Jamaica Cricket Association All-Island Limited Overs competition at Chedwin Park in St Catherine yesterday. In what turned out to be a rather one-sided affair, St Mary won by a margin of 160 runs to notch their first hold on the trophy. They also walked away with $500,000.

Winning the toss and choosing to bat, St Mary racked up 277 for five from their 50 overs. Orlando Lyons looked in imperious touch, top scoring with 72 from 94 balls. He looked untroubled as he drove and pulled with authority. National allrounder Alwyn Williams was also among the runs, blasting 55 from 46 balls. Anthony Walters played a little cameo at the end to finish with 39 from 23 balls.

The St Mary total could have been even bigger. They were at 123 for one after 23 overs, and were set to go past the 300 mark, but Jamaica Scorpions offspinning allrounder Damani Sewell kept taking wickets at crucial points. St Mary were set to explode, to finish with three for 60 from 10 overs. Michael Thompson chipped in with two for 48.

There was high drama when St Ann started their reply. Bowling at good pace and getting the ball to move late, Wayne Chisholm blasted out three early wickets. Williams’ steady line and length also proved highly effective. At one point, St Ann were reeling at five runs for five wickets! The men from the Garden Parish looked completely bewildered at the start of their innings as it was virtually match over after the opening eight overs.

Ronaldo Ingram swung his bat to good effect to hit 61 from 47 balls, while Amoy Campbell contributed 34 from 30. These two only made the loss less embarrassing for St Ann as it was clear that the opening burst from Chisholm and Williams had virtually settled the contest. They finished with five for 47 and two for 16, respectively, while Darrien Walker applied the finishing touches with two for 15 as St Ann were dismissed for 117.

“I feel real great,” St Mary captain Andre Creary said after the game. “We bowled well in terms of line and length, and it was pleasing to see how our top order batted. It’s a great feeling making our first final and winning our first trophy.”

Sewell, on the other hand, took the loss in stride.

“I’m disappointed,” he said. “We just now have to go back to the drawing board to see what went wrong. Our top order just didn’t bat well against the ball that was moving around, and that was where we lost the game.”