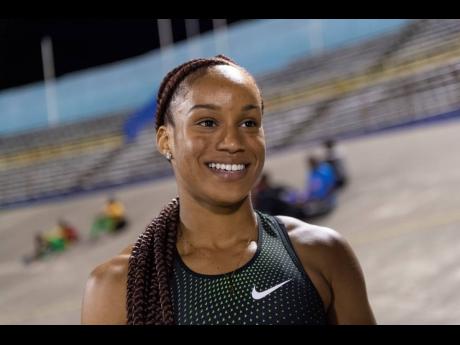 Following confirmations that Jamaican teenage sprinter Briana Williams has tested positive for the banned diuretic hydrochlorothiazide (HCTZ), her representative, Dr Emir Crowne, has outlined his two main objectives – to secure an expedited hearing and to prove that the 17-year-old was not at fault.

Hydrochlorothiazide is used by some athletes to lose weight or hide the presence of other banned substances.

Williams, the World Under-20 double sprint champion, tested positive for the banned substance at the National Senior Championships at the National Stadium between June 20 and 23, where she placed third in 10.94 seconds in the 100m, essentially securing a spot on Jamaica’s team to the World Championships in Doha, a spot that is now in jeopardy with the possibility of a hearing.

The tests were carried out at the World Anti-Doping Agency’s (WADA) accredited lab in Montreal, Canada, with the athlete and her team learning of the adverse ­analytical finding (AAF) on July 25. The sprinter’s ‘B’ sample has, according to our sources, confirmed the presence of HCTZ, but Crowne, who has also taken issue with Williams being identified before the end of the process, contends that the athlete should not be held responsible and, given the circumstances, will be arguing for, at worst, a reprimand.

The attorney confirmed earlier Gleaner reports that the substance was contained, but not listed as an active ingredient, in an over-the-counter cold-and-flu medication that was given to her by a close relative and that she had declared on her doping control form while being tested by Jamaica Anti-Doping Commission (JADCO) officials.

He also pointed to what he ­considered a key distinction.

“Unlike pretty much every case that has been heard so far – at least involving Jamaican ­athletes and so-called contaminated products – those all involved powders of some form. Here, we are dealing with over-the-counter cold-and-flu tablets, literal tablets,” Crowne began.

“Quite frankly, the concern with powder and contaminated supplement issues is that an athlete might self-contaminate – that you may actually put the banned substance in your own powder and then claim it to be contaminated,” he added. “Here, we are miles away from that because here we have a sealed tablet that contained the diuretic in question.”

After being notified of the AAF, Williams' team sent the pills to NSF International Labs in Michigan, the United States, which conducted independent tests and confirmed that the medication used by the athlete was contaminated with traces of HCTZ.

“… Therefore, the only source has to be the manufacturer that produced the pills and sealed it,” Crowne stated.

Outlining his approach to the case, Crowne shared: “Failing a finding of ‘no fault whatsoever', then we will rely on a finding of ‘no significant fault’ because again, it’s a contaminated product, and under the WADA code and JADCO code, the minimum sanction has to be a reprimand. So we will be asking, in light of the circumstances, that if the panel does not accept ‘no fault’ that it accepts that there was ‘no significant fault’ on her part and that she, at most, receive a ­reprimand for the unfortunate event.”

With the Jamaica Athletics Administrative Association (JAAA) expected to name its World Championships team on September 6, Crowne is also ­hoping that any possible disciplinary hearing will be expedited.

“With Doha selections upcoming, I understand September 6 is the deadline for selection, if JADCO can [convene] the Anti-Doping Disciplinary Panel, we would need an expedited hearing to determine what her sanction would be – if any,” said Crowne.

“From what we have heard, we expect that a suitable explanation will be given and that it won’t translate into a hearing where the athlete would have to make [herself] present because the explanation and the tests done seem that they might, in my opinion, exonerate the athlete,” said Blake.

Of note, in 2013, multiple Olympic and World Championships gold-medal winner Veronica Campbell-Brown was provisionally suspended by the JAAA, after also testing positive for HCTZ and was later given a public warning. The ruling was challenged by the IAAF at the Court of Arbitration for Sport (CAS). However, the court decided to clear Campbell-Brown of all doping charges.

Two years later, the CAS upheld a two-year ban handed down by the Jamaica Independent Anti-Doping Disciplinary Panel on thrower Traves Smikle for the presence of the same substance.

Under current WADA and IAAF rules, first-time offenders face the possibility of a maximum four-year ban.

It should be noted that JADCO chairman Alexander Williams could not be reached for comment yesterday.