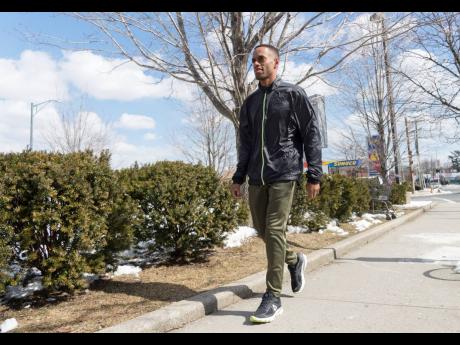 “I have to choose life over everything.”

For Jamaican distance star Kemoy Campbell, the decision to retire from competitive athletics was not an easy one, but it was simple enough.

Seven months after collapsing while running the 3,000m at the Millrose Games in New York after his heart stopped beating, Campbell, Jamaica’s leading male distance athlete, has had to end his career at the age of 28 after doctors limited what he was allowed to do physically.

The five-time national champion, national record holder, and Olympian, who was harbouring ambitions of a return to the track, is now hoping to have an impact in other areas, particularly coaching and public education on heart disease and general healthcare for sportsmen and women.

“I decided that retiring was the best option for me. I pushed myself over the years as hard as I can. Every single run I’m pushing myself hard, and I think that caught up with me in the end. Even though the doctors are not sure exactly happened, the fact of the matter is that my heart is not working properly, and because of that, I have decided to retire,” Campbell explained to The Sunday Gleaner.

“It was a very hard decision. I kinda had it in the back of my head after the doctors told me that I could only run for 20 minutes and that within those 20 minutes of running, I should not get my heart past 164 bpm, that was kinda where I figured out that they would not want me running fast at all,” he added.

“Training is pretty intense, and there is no way I could have competed with just training for 20 minutes. That’s impossible. So in the back of my head, the doctors already had a plan that they didn’t want me running, and they had a good reason why, but when I heard the decision that they came up with, it was still kind of a shock to me because this is what I have been doing, this is what I love doing, and this is what I always saw myself doing for years and years,” Campbell continued.

Campbell, who now has an implantable cardioverter-defibrillator in place as a safeguard, lost consciousness shortly after stepping off the track while pacing the 3,000m event at The Armory on February 9.

After being attended to by medical personnel at the venue, who used defibrillators to assist him, Campbell was taken to the nearby New York-Presbyterian/Columbia University Hospital, where he later regained consciousness and underwent a number of tests to try and determine the cause of his heart failure.

That cause is still unclear, but Campbell knows one thing for sure: his time in the sport is not entirely over.

The former Bellefield High School and University of Arkansas standout says he will help out at his track club – Reebok Boston Track Club, in Charlottesville, Virginia – where he hopes to acquire the necessary experience to help him move into coaching. He also wants to raise the awareness around heart disease in Jamaica.

“As to the emotions that I am feeling, I really didn’t expect to be out of the sport this early, but at the same time, I have to choose life over everything, and I just want my friends and family to be happy and appreciative of what I have done for them and for Jamaica, and they have all said that I have made them proud. I have got tons of messages from people saying I have made them proud, so at the end of the day, I am happy that I am here, I am sad that I have to leave the sport, to stop competing, but I am sure there are other ways that I can contribute and be a part of the sport,” Campbell added.

“I’m going to stay in Charlottesville and help out in the team where I can, gain the experience I’ll need to transition into coaching. But I also want to spread awareness for heart disease in Jamaica because I know for a fact that there are people living there with it and they don’t know,” Campbell stated before also speaking to the impact of having his fiancée, Rachel, around to help with his issue.

“Having (Rachel) around has helped a lot to deal with this situation. Whenever I need someone to talk to or complain about something to, she is always here, so at the end of the day, I am appreciative of her. If I didn’t have her, I would be taking the situation much harder. She always tries to cheer me up, and I respect her for that. It’s not an easy time for her either because she knows I love running and competing, but having her has helped me to take the situation less to heart,” Campbell laughed.

It may no longer allow him to do what he loves, but his heart is still very much in the sport, and it’s clear that as he did on the track, off it, Campbell is prepared to go the distance.