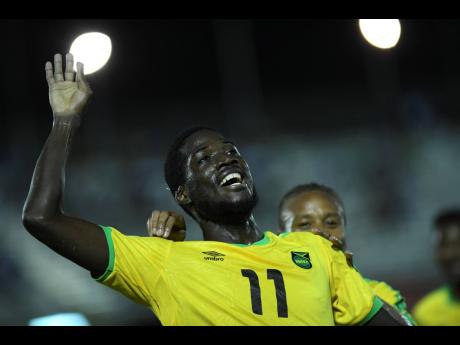 Reggae Boyz striker Shamar Nicholson continued his impressive run of form, bagging a brace to lead Jamaica to a 6-0 win over Antigua and Barbuda in their Concacaf Nations League fixture at Montego Bay Sports Complex on Friday.

Despite getting his fourth and fifth goals in national colours, Nicholson, who recently signed a four-year deal with Belgian club Sporting Charleroi, said he was a little disappointed not to have scored more against the regional minnows, and is looking forward to tomorrow’s assignment against Guyana at the Leonora National Track and Field Centre in Georgetown, Guyana.

“Yeah, I am a bit disappointed in not getting the hat-trick, but this game is gone so now all focus turns to Monday’s (tomorrow’s) game. It is in front of me, so at least I’ll get another opportunity to get it. It wasn’t my best game, but the most important thing was that we worked as a team and also getting on the scoresheet,” Nicholson told The Sunday Gleaner.

The 22-year-old opened the scoring for the Jamaicans in the 9th minute, latching on to a flicked header, before holding off his marker and slotting into the back of the goal beyond the onrushing goalkeeper, and got his second in the 51st minute with a free header at the back post. Between his strikes, debutant Bobby Reid, who plays for Fulham in the English Championship, got his name on the scoresheet, after picking up a pass from Leon Bailey on the doorsteps of the goal before slotting home in the 31st minute.

Brian Brown’s 67th-minute strike further increased the Jamaican advantage before Bailey helped himself to a goal in the 77th, after cutting inside at the top of the box and unleashing a powerful strike. The rout was wrapped up by Peter-Lee Vassell in the 81st minute, as the Jamaicans got their League B campaign started in emphatic fashion.

“We started off really bad, then we got things together, but the most important thing is the three points and the only thing we can do from this is grow,” Nicholson shared.

Nicholson, who actually scored a screamer on his debut for Sporting Charleroi recently, spoke to his form and credited his time in Europe for his improvements.

“Playing in Europe helped me grow a lot because the coaches demand so much from you. The relationship that they build with you gives a different level of confidence. It allows you to just be you, so even if you make a mistake you’re not demoralised,” said Nicholson, who started his professional career at local premier league club Boys’ Town, before moving to Slovenian side Domzale, where he netted 13 goals from 29 appearances last season.

Nicholson, meanwhile, encouraged local youngsters to look to make a mark in the local top-flight competition, as a key component towards their development.

“For me, I think playing schoolboy football is good, but if you want to go elsewhere one has to go through the premier league, which is the highest league in the country. So if you are not looking to dominate the local premier league, you can’t go outside and do it, and that is a fact,” Nicholson noted.

Antigua and Barbuda captain Karanja Mack felt his team started the game too flat and was not able to recover, while noting that his team did not approach the game with too much respect for their opponents, despite the presence of Bailey and other well-known players among the Jamaican ranks.

“We were flat-footed from the start,” said Mack. “We kept going, but it really wasn’t our night. We are all humans, it’s not about names, we came out to play, but the game didn’t go our way. We have to go back to the drawing board and start again.”