Subratie’s My Switcharoo can upset rivals 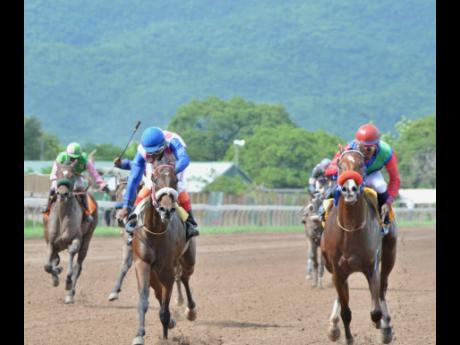 At five and a half, three Saturdays ago, CRYPTOCURRENCY took off along the rail a half-furlong out, collaring a tiring and drifting PRINCE CHARLES, who had seemed home and dry after rushing past the battling pair of ROJORN DI PILOT and MYSTIC MAMA a furlong and a half out.

The cast has changed somewhat with ROJORN DI PILOT joined by stablemate AMERICAN INVADER, who, as usual, has been ripping the exercise track, suggesting it will be another cracker on the lead. Add to the mix PHENOM, coming off a six-month break and working well.

CRYPTOCURRENCY will relish the war upfront and should be the winner, on paper, but there’s a new foreigner in town, MY SWITCHAROO, who, if her May 23 maiden-claiming victory at Gulfstream Park is anything to go by, could chew up the opposition, despite seemingly doing very little at exercise in six workouts on local soil.

Owned by Michael Bernard, who trails Carlton Watson by $286,950 in the owners’ championship, MY SWITCHAROO, in her fifth of six starts at Gulfstream Park, Florida, dismantled a field of maiden claimers, fillies, and mares at six furlongs, clocking 1:11.3 in a gate-to-wire affair.

Bolting from post-position one, the dark bay three-year-old filly led easily by a length, with her five rivals chasing before changing leads at the quarter pole and skittering away to win by almost a dozen lengths, setting splits of 23.0, 46.3, and 59.0.

So impressive was MY SWITCHAROO that her connections stretched her out at a mile in her last race in Florida, June 15, and she finished third behind 1:38.0. However, her forte appears to be sprinting, sired by Turbo Compressor, who carried the 2012 Breeders Cup Turf field at a hectic pace before being collared off the final turn.

Sporting a race record of her May victory, a second-place run at six furlongs on her January debut, third last time out in June and two fifth-place finishes, MY SWITCHAROO has been lightly prepared in trademark Gary Subratie fashion, a three-furlong gallop in 36.4 the second time he worked locally, two Sundays ago, followed by an easy half-mile in 50.4 last Sunday morning.

Facing run-on sprinter CRYPTOCURRENCY plus quick horses such as UNIVERSAL BOSS, ROJORN DI PILOT, PRINCE CHARLES, PHENOM, and fellow importee, AMERICAN INVADER, an exercise machine, MY SWITCHAROO has a stern test on her local debut, especially without decent speed work under her girth.

However, do not be fooled by Subratie playing possum for the umpteenth time. Bernard, who famously lost the 2012 owners’ title by $49,000 on silverware won by Elite Bloodstock, an announcement made at the track on New Year’s Day 2013, has been snapping at Watson’s heels under the nom de plume Michros, intent on winning his first crown.

To make it happen, Subratie has to get the cash rolling for his mainstay owner because Watson is set to clap right back at him in the night pan with imported SUMMER SUN, going seven furlongs in a restricted overnight allowance.