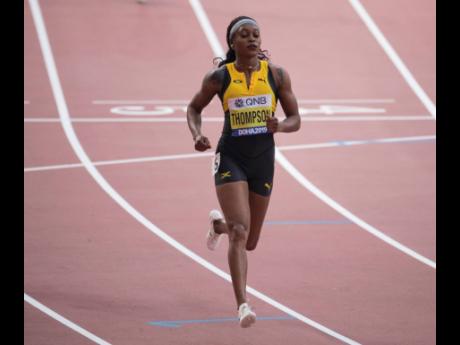 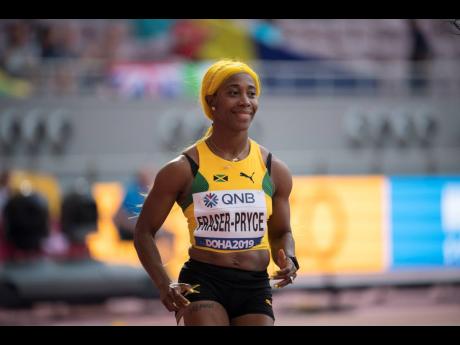 One is the most successful athlete in the women’s 100 metres in World Championships history, the other is the reigning double Olympic sprint champion. They are both Jamaican and they are both gunning for gold at the 2019 Doha championships inside the Khalifa International Stadium.

Shelly-Ann Fraser-Pryce and Elaine Thompson got their campaigns under way yesterday, both advancing to today’s semi-finals with comfortable wins ahead of what is one of the most anticipated showdowns at this year’s championships.

Golden hair, golden ambition, Fraser-Pryce was most impressive in qualifying yesterday, winning her heat after shutting down the motors well ahead of the finish line in a time of 10.80 seconds, her fourth trip going 10.80 or faster this season.

No athlete has recorded more sub-10.80 seconds clocking than the two-time Olympic champion this season.

“For me, it’s a blessing to be able to be where I am. Many persons did not think I would be where I am at right now, including me at times, but here I am. It doesn’t matter what happens, at the end of the day, I have already done overwhelmingly more than I could ever ask for, so to be here and doing the things that I am doing, at the age that I am doing it and coming back from having my son, anything else is icing,” said a calm and thoughtful Fraser-Pryce.

Fraser-Pryce is somewhat of a World Championships 100m royalty. Her three 100m gold medals (2009, 2011 and 2015) is unmatched. In fact, having missed the 2017 event due to childbirth, she has never won anything but gold in this event at the championships.

Thompson was extremely comfortable herself, less aesthetically pleasing in terms of her execution, but very relaxed in an all-business 11.14 seconds win in her heat.

A quick and silent trip through the mixed zone provided no indication of her assessment, in Jamaican parlance, no long talkin’ from the sprinting titan.

In truth, she has been doing her talking on the track.

Her 10.73 seconds season’s best, a time shared with Fraser-Pryce, is the fastest this season. Four other runs under 11 seconds show just how impressive of a season she has been having.

However, as excellent as Thompson has been this year, she arrives in Doha half-a-step behind Fraser-Pryce, who has so far registered nine sub-11 seconds clocking in the 100m this season. It should be noted that Fraser-Pryce has raced three more times in the 100m, compared to Thompson this season.

Importantly also, their only race together – at the National Senior Championships – ended in a win for Thompson.

Something has to give.

There really is very little to choose between the two and once they safely navigate today’s semi-finals at 9:20 p.m. (1:20 p.m. Jamaica time), this will be one of the most explosive women’s 100m final in World Championships history.

On the firing line is the championships record of 10.70 seconds, which was set by American Marion Jones in 1999.

The supporting cast have all stamped their ticket to the next round, with Ivory Coast’s Marie-Josee Ta Lou, 10.85; Dina Asher-Smith (Great Britain), 10.96, and Murielle Ahoure (Cote d’Ivoire), 11.05, all looking in good shape.

Young Jamaican Jonielle Smith, a late confirmation to the team, given the issues with Briana Williams, who was only this past week cleared after an anti-doping violation, is also through to the next round after her 11.20 seconds third-place finish in her heat.

Barring a huge surprise, this will serve as an education for her, one that she will use in the future as she looks to emulate her more celebrated stablemate.

The expectation is for a Jamaican quinella in this event, 10 years after Fraser-Pryce and Kerron Stewart brought home gold and silver at the Berlin World Championships.

If it all goes to plan, Jamaica will increase its World Championships medal tally in this event to 13. If it goes beyond our wildest dreams, that number will move to 14.

Either way, it is shaping up to be one for the ages.