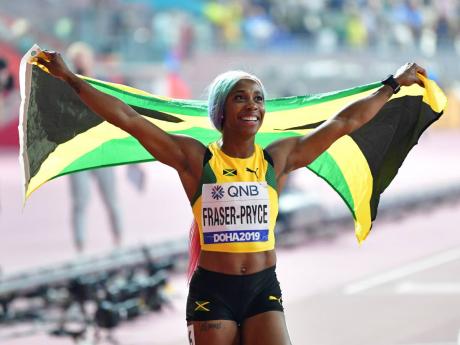 Thanks to Tajay Gayle and Shelly-Ann Fraser-Pryce, the first three days of the 17th IAAF World Championships will take an extra special place in this country’s sporting history. On day two, after a shaky qualifying effort, Gayle produced the long jump of a lifetime to secure Jamaica’s first ever gold medal in his event. A day later, Fraser-Pryce added to her considerable portfolio of success with a big win in the 100m.

Both moments were brilliant. Gayle put the outstanding Cuban Juan Miguel Echevarría, under pressure with a personal best of 8.46m on his first attempt. When he followed up with a massive national record of 8.69m, his fourth, it was over. The feat made him the 10th best of all time and the king of Jamaican long jumpers.

The foundation was laid by James Beckford, holder of the old national record, with an Olympic silver medal from 1996 and two World Championship silver medals.

The ‘Mommy Rocket,’ Fraser-Pryce, arrived in Doha for the World Championships as the most successful 100m sprinter in history, and her comprehensive victory there made it harder for anyone ever to catch her. Now, she has four 100m world titles to go with her 2008 and 2012 Olympic gold medals. Her winning time, 10.71 seconds, marked the 15th time she has burst past the 10.80m. That’s two more than Marion Jones.

Both Fraser-Pryce and Gayle are products of the MVP Track Club, which is celebrating its 20th anniversary in style.

Much has been written about her return from maternity and the patient approach she and her coach, Stephen Francis, have taken to bring her back to her best. In time, chapter and verse will be devoted to the way MVP and the University of Technology have helped Jamaica to spread its wings athletically. For now, it’s enough to highlight the late Germaine Mason, who won a World Indoor bronze medal in the high jump in 2004, and O’Dayne Richards, winner of a historic bronze medal at the 2015 World Championships.

That sense of athletic adventure has led Jamaica into a new age. Day three at the World Championships saw Fedrick Dacres take a medal, the silver, at the third try in the men’s discus throw, following good efforts in 2015 and 2017. With Fraser-Pryce continuing Jamaica’s time-honoured tradition in sprinting, Gayle and Dacres presented proof positive that Jamaica can also excel in the field events.

Now we can work towards a future where a more rounded Jamaican track and field programme can reach the top of the medal table at the Worlds and the Olympic Games.

Such lofty ambition can become real when there is full power on the track and in the field. Gayle and Dacres are special projects, and perhaps they will inspire others. Gayle is the leader of a squadron of promising long and triple jumps and Dacres and his Calabar, University of the West Indies, and Reckless Control Throwing Club training partner, the 2017 World Championship finalist Traves Smikle, have inspired young prospects like 2018 World Under -20 champion Kai Chang, Kevin Nedrick, and Roje Stona.

The tide is turning. Jamaica is now a power not only in sprints but also in the jumps, throws, and hurdles. With first-time World 800m finalist Natoya Goule leading the way, the middle distances may join the party. If that happens, the dream of topping the table at a global track and field championship may not be so far-fetched.

Hubert Lawrence is the 1989 co-founder of the National Hurdles and Field Events Championships.