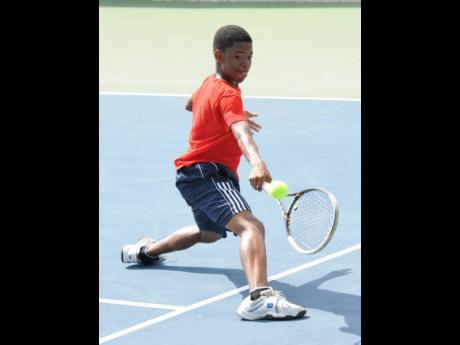 Two of Jamaica’s top junior tennis players, Michaela Stephens and Damani Cain, stole the show on Saturday at the Eric Bell Tennis Centre in Kingston. The youngsters scored impressive victories in the King Alarm Junior Tennis Tournament, which ended after a two-week break. The tournament, which began on September 21, when two days of play took place, had a record turnout of players, and this, in addition to rainy weather, led to the additional day’s play on Saturday.

Stephens, a 17-year-old student at Liberty Academy, was impressive in her victory over Abigail Perue, winning 6-1, 6-1 to take the girls’ 18-and-under title. Good serving and all-round court dominance saw Stephens cruise to a comfortable victory. She told The Gleaner afterwards that she made an effort to establish her dominance early, and it paid off as her opponent was never allowed to get her game going.

Later in the day, they changed from rivals to colleagues and won the girls’ 18-and-under doubles title by defeating Kobi Wilcott and Aanchal Khemlani 6-4, 6-1 in a match that was competitive in the first set.

Cain, a 17-year-old sixth-form student at Wolmer’s Boys School, continued to show good form this year by defeating John Azar Jr 6-3, 6-2, for the boys’ 18-and-under title. Azar, who has not played much tennis this year, showed his lack of match practice, but he made Cain work hard for victory.

Cain said afterwards that it was a competitive match and that he had to keep his concentration on track all the way as he knew that he was facing a dangerous opponent.

“I decided to keep him moving and varying my tactics, and it paid off,” he said. “I am very happy with the way that I played and that I was able to come away with the title.”