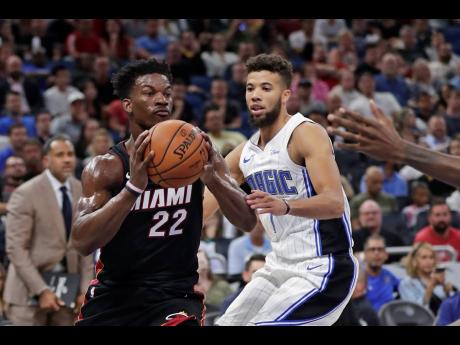 Hip hop isn’t always blaring from the speakers in the Miami Heat practice facility these days. Pat Riley’s preferred sound is Motown. Erik Spoelstra hasn’t had much of a chance to sneak U2 into the mix.

These days, country music seems to be most prevalent in the Heat gym.

That’s part of the Jimmy Butler effect. He gives the Heat a new sound – and a new look.

The noted country fan makes his official Heat debut tonight when Miami opens the season at home against No. 2 overall pick Ja Morant and the Memphis Grizzlies. Landing Butler was the big offseason move for the Heat, and the four-time All-Star said he already is convinced that his new team can compete.

“We’ve got some dogs,” Butler said. “We’ve got some guys that have something to prove every single day. Not just in a game, but out here in practice. Guys that are competing, not scared of anybody in a Heat jersey, not scared of anybody that’s not in a Heat jersey. That’s what I love about it. You know each and every day, each and every game, we’re going to fight, man. And I’m proud of that. I’m happy about that.”

Butler takes over as the face of the Heat, now under contract with Miami for the next four seasons and looking to follow the path of his good friend Dwyane Wade — who retired after 16 seasons, most of which were spent in South Florida.

It didn’t take long for Wade to decide that he wanted to be on a championship quest. The Heat are certain that Butler has that desire in him as well.

“You have to have the right kind of competitive guy that can walk into a building like this where a bunch of legends came before him,” said Spoelstra, who is entering his 12th season as Heat coach. “You either want that and want the expectations and the pressure and the platform to play for all the stakes – or you don’t. Jimmy Butler wants that.”

When Butler arrived for his first day of 5-on-5 on the Heat practice court, a few days before the team gathered last month for training camp, plenty of team officials were seated courtside.

Butler might have thought they were there for the Day One show.

But that’s just the Heat way: Riley, the team president, is almost always at practice. So is managing general partner Micky Arison and his son, team CEO Nick Arison – provided they’re in town. Alonzo Mourning is a practice regular. Chris Bosh has popped in from time to time.

And that is among the many things that Butler is enjoying so far in his Heat tenure.