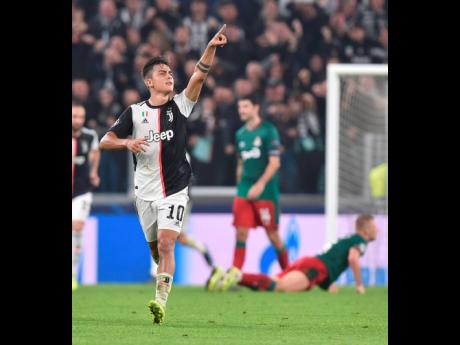 Just when some of Europe’s top teams risked failing to advance from their Champions League groups, they steadied the ship.

Real Madrid and Tottenham both earned their first European wins of the season yesterday against overmatched opponents – but in very different style.

Real had to work hard to win 1-0 against a Galatasaray team with their own problems, while last season’s finalists Tottenham swept aside Red Star Belgrade 5-0.

That emphatic win was sorely needed for Tottenham, had won just two of their last 11 games and conceded seven against Bayern Munich in their last Champions League outing. But Tottenham aren’t out of the woods yet.

“We still know we’ve got a long way to go,” striker Harry Kane said. “We can hopefully build on this.”

Juventus came within 13 minutes of a loss, which could have endangered their hopes of reaching the knockout stage, before Paulo Dybala scored twice to beat Lokomotiv Moscow 2-1.

Meanwhile, Paris Saint-Germain, Bayern Munich and Manchester City are all firmly on course to advance after recording their third wins to top their groups.

Having won just one of their last four games, Real Madrid were looking to regain some momentum with a big victory over Turkish champions Galatasaray. They had to settle for a narrow win.

A deflected goal from Toni Kroos gave Real a 1-0 win, but it was far from a sure thing.

PSG are headed for qualification after a drama-free 5-0 win over Club Brugge, who drew 2-2 with Madrid in the previous round. PSG only had a 1-0 lead with a half hour remaining before substitute Kylian Mbappe scored a hat-trick to turn it into a rout.

After being humiliated 7-2 by Bayern in their last game, Tottenham responded with a big win of their own.

While Red Star were hardly of Bayern’s calibre, scoring five goals for the first time since January could be a solid morale booster for Tottenham.

Son Heung-min and Harry Kane scored two goals each, while Erik Lamela marked his 200th appearance for Tottenham with a goal and two assists.

Bayern briefly risked dropping Champions League points for the first time this campaign, but two goals from Robert Lewandowski helped them recover from 1-0 down against Olympiacos to win 3-2.

Juventus nearly suffered their first loss of the season in all competitions before Dybala took matters into his own hands.

With Juventus 1-0 down to a goal from Alexei Miranchuk, the Argentine forward curled a 77th-minute shot into the net and followed up shortly after by slotting home a rebound for the second.

Juventus are level with Atlético Madrid on seven points at the top of Group D after Alvaro Morata’s header lifted the Spanish club to a 1-0 win over Bayer Leverkusen.

Things are going far from smoothly for English clubs this season in the Champions League – except for Manchester City.

The Premier League champions are cruising in first place in Group C after earning their third win in emphatic style with a 5-1 demolition of Atalanta. The other three English clubs in the Champions League – Tottenham, Chelsea and Liverpool – have all taken losses so far.

Ruslan Malinovskyi gave Atalanta the lead from the penalty spot, but that lasted just six minutes before Sergio Aguero leveled with the first of his two goals. Raheem Sterling scored a hat-trick inside 11 minutes in the second half.