Dinthill shrug off claims of luck 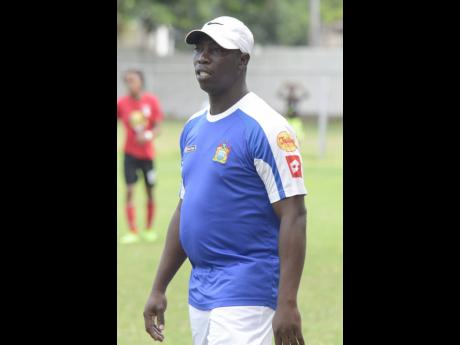 Dinthill Technical High School continue to ride their fortune in the 2019 ISSA/WATA DaCosta Cup after they defeated Petersfield High 2-0 in their second match of the quarterfinal round at the STETHS Sports Complex yesterday.

Karim Bryan netted a brace in the 62nd and 70th minutes to put Dinthill in pole position of Group Three with six points. Frome, who drew 0-0 with Port Antonio in their game, are second with four points. Port Antonio, on a single point, and Petersfield, on none, are third and fourth, respectively.

“It wasn’t our best performance, but we managed to win the game,” Dinthill head coach Xavier Gilbert said. “I think we were dominant, yes, but I think we could have been better, and should have been better. I’m, however, happy for the win and the clean sheet, which is our fifth straight.”

When asked about them riding their luck through the competition, Gilbert told the Sunday Gleaner that they are grateful for the lifeline and in just continuing to work towards their third hold on the DaCosta Cup after a nearly 40-year drought.

“Some people say it’s luck, but the reality is that I think we were very unlucky in the first couple of games,” he said. “We weren’t playing badly, we just weren’t getting the results. Because, traditionally, Dinthill usually dominates the group, and then the youngsters find themselves behind in some games, it affects them psychologically.

“We continued and still continue to work. I must commend the management for even sticking with the coaching staff. Yes, we managed to get a lifeline, and we are just doing what we were doing all along to get good results.

“We are just one win away from the semi-finals. The turnaround time is quick, so we just have to work on the recovery and their mental state. It’s a tough place to go and play, but we are up to it.”