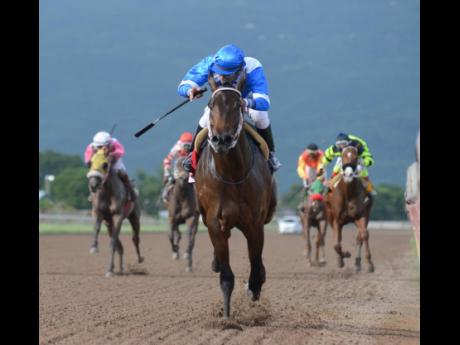 Breaking sharply from the one hole with Ameth Robles, the bay colt moved further away from rivals with each stride, changing his lead a furlong out with a tap of the whip by the Panamanian rider.

WOW WOW, a Casual Trick-Sarah Barracuda offspring, trained by Gary Subratie and owned by Michael Bernard, clocked 1:12.3 for the six-furlong event, confirming himself as a shoo-in for next month’s seven-furlong Pick-3 Super Challenge and December’s Jamaica Two-Year-Old Stakes at a mile, victories which will all but assure Bernard his first owners’ title.

Meanwhile, back-to-back disqualifications on the 10-race card helped trainer Michael Marlowe to a three-timer and Prince Holder to back-to-back winners after they had teamed up to land the fourth race with 3-1 chance LEEKOUT.

Holder benefitted from K J EXPRESS’ disqualification at five furlongs round, closing strongly against the rail with Patrick Lynch’s 11-1 outsider, LALA DIVA, who was awarded the event after the stewards ruled on an infringement at the half-mile.

Ironically, 5-1 chance, K J EXPRESS, partnered by leading rider, Christopher Mamdeen, was adjudged to have hindered his stablemate, KALAHARI, and taken out of the frame, costing Anthony Nunes a win in his stakes race with champion Wayne DaCosta.

After Holder’s stroke of luck in the fifth, it was Marlowe’s turn to benefit from a stewards’ enquiry, his CAT’S RIGGER awarded the sixth after being repeatedly hindered by ICTUS in their battle at five furlongs straight.

Marlowe, son of the late Valbert Marlowe, renowned for winning the Gold Cup on three occasions with Kilowatt, 1967, ’68 and ’70, completed his first-ever three-timer at Caymanas Park with 5-2 chance, NUCLEAR DAN DADA, in the 10th event, partnered by apprentice Daniel Satchell, who was also aboard CAT’S RIGGER.

Omar Walker also rode two winners, 3-1 chance UNION FOUR in the third and 3-5 favourite, LADY BLUE, for DaCosta, who earned roughly $134,300 more than Nunes, who he started the day trailing by $11.2 million and picked up additional purse money with TOMOHAWK in the Cash Pot Trophy.

Nunes won the ninth with a recent claim, STALLWALKIN’GIRL and picked up valuable purse with CORAZON, who chased home LADY BLUE, as well as third and fourth-place finishes with VERSATILE VISION and CASH IS KING in the Cash Pot Trophy.