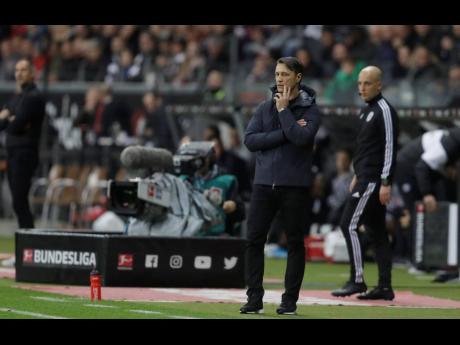 AP
Bayern’s head coach Niko Kovac reacts as he watches his team play during a German Bundesliga match against Eintracht Frankfurt and Bayern Munich in the Commerzbank Arena in Frankfurt, Germany, Saturday, November 2.

Bayern Munich chose to part company with coach Niko Kovac yesterday – one day after the seven-time defending German champions slumped to their heaviest Bundesliga defeat in more than 10 years.

Bayern lost 5-1 at Kovac’s former team Eintracht Frankfurt on Saturday, the team’s second league loss and the fifth game from 10 in which they have dropped points this season.

Bayern said in a statement that they had “relieved head coach Niko Kovac of his duties” after he had talks with club president Uli Hoeneß, chairman Karl-Heinz Rummenigge and sporting director Hasan Salihamidzic. The statement noted that Kovac had offered to resign.

“The performances of our team in recent weeks and the results have shown us that there was a need for action,” Rummenigge said. “Uli Hoeneß, Hasan Salihamidzic and I had an open and serious discussion with Niko this Sunday based on that and came to the mutual decision that Niko is no longer head coach of FC Bayern. We all regret this development.”

Bayern said Kovac’s assistant, Hansi Flick, will take over “for the time being” and will be in charge for Wednesday’s Champions League game at home against Olympiakos and Saturday’s Bundesliga clash with Borussia Dortmund.

Bayern are four points behind leaders Borussia Mönchengladbach in the Bundesliga.

The 48-year-old Kovac had been in charge since the beginning of last season, when he led Bayern to a German cup and league double.

“I think this is the right decision for the club at this point in time,” Kovac was quoted as saying in the statement. “The results and also the way we were playing recently led me to this decision. My brother Robert and I thank Bayern for the last almost one and a half years. In this time our team won the league, the German Cup and the German Supercup. It was a good time.”

Kovac’s team wowed Europe with a 7-2 rout of last year’s beaten finalist Tottenham in the Champions League on October 1, but struggled in every game since.

They lost 2-1 at home to Hoffenheim in the following game and then drew 2-2 at struggling Augsburg. They failed to impress in narrow wins over Olympiakos (3-2 away), promoted Union Berlin (2-1 at home) and only barely scraped past second-division Bochum (2-1 away) in the German Cup last Tuesday.

“It’s not a huge surprise what happened,” Bayern captain Manuel Neuer said of the defeat in Frankfurt. “It’s just not happening. Something has to change.”

While Robert Lewandowski proved a reliable goalscorer, the rest of the team lacked balance and Kovac’s problems were made worse by serious injuries to defenders Niklas Süle and Lucas Hernández. Jérôme Boateng will be suspended for the game against Dortmund following his early red card in Frankfurt.

Bayern have already conceded more goals in the league, 16, than Union Berlin. It’s the side’s worst defensive record since Jürgen Klinsmann was coach in 2008.