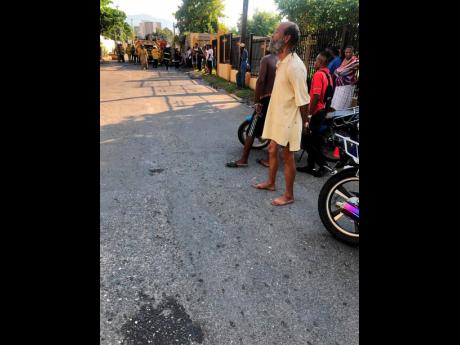 Jamaican Olympian and former Kingston College track star Rupert Hoilett will be assessing the damage to his property after fire consumed shops around his premises at his Skibo Avenue residence in Kingston yesterday.

When the news team arrived at the scene, firefighters had already extinguished the blaze that threatened to destroy his home of almost 30 years.

Fortunately for him, the house was left unscathed. The same could not be said, however, for the furniture shop that was situated on the premises, which was completely destroyed, and a makeshift container that was part of the business, which was also damaged.

According to Hoilett, he woke up to smoke and the flames around the property, and someone made a call at 7:15 a.m. to the fire department.

The York Park Fire Brigade was the first to arrive at the scene and start the operation to extinguish the blaze. A member of the team said that the fire was confined to the furniture shop that was rented on Hoilett’s property before spreading to an old car.

The firefighters encountered difficulties when their truck ran out of water and the hydrants located in the vicinity were discovered to not be working. They called for assistance from the Stony Hill and Trench Town fire stations, from which help arrived on the scene and helped to fully extinguish the fire.

Hoilett was grateful to the team for their efforts, considering the challenges they had.

“They did a good job with the resources they had because they ran out of water,” Hoilett said speaking to The Gleaner.

He said that an assessment of what was lost in the blaze will have to be done and that the cause of the fire is yet to be determined.

Hoilett noted that the house, which he has lived in since the ‘70s, holds many for him.

“This place has a lot of memories – it’s a place with a personality. I started out not with that intention, but that is how it worked out,” he said. “The first thing is to clear up and to see what really happened. The place is such you can’t rebuild on that. You have to build again.”

Hoilett emerged from obscurity to represent Jamaica in the 1964 Olympic games in Tokyo while still a student of Kingston College.

He had burst on to the scene at the high school track and field championships a year earlier by winning the 440-yard race in 49.3 seconds, at the time the first sub-50 clocking in the history of the event at Champs.

He sealed his place on the Jamaica team to Tokyo with an improved 49.1 seconds at Champs in 1964. He was given the prestigious honour of carrying the nation’s flag at the opening ceremony.