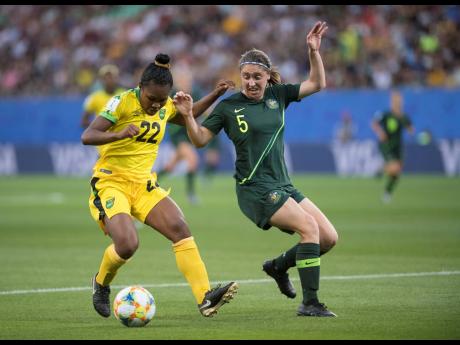 National senior women’s football team head coach Hue Menzies, says the Reggae Girlz will have a tough task trying to take one of two spots for the 2022 Summer Olympic Games based on the draw they have received for the Concacaf final round of qualification.

Jamaica have been placed with Canada, Mexico, and St Kitts and Nevis, while the other group consists of the United States, Costa Rica, Panama, and Haiti. But Menzies, who guided the Reggae Girlz to their first appearance at a major event when they qualified for the FIFA Women’s World Cup in France this year, says that with only two spots available, it would have been better to be in the group with the US so that they could avoid playing them in the semi-finals.

However, with the possibility of facing the USA in the semi-final a real prospect, Menzies said that Jamaica must aim to win the group to avoid the world champions in the last four.

“We would rather be on the US side, but it now forces us to win the group,” he said.

He continued, saying that although Canada had a disappointing Women’s World Cup campaign, they are still the other powerhouse in the region behind the US, and Jamaica topping the group ahead of them will be no simple task. He also said that the Mexicans would present their own difficulties.

“Canada had a hiccup in the World Cup, but they are going to be a tough one,” Menzies said. “Mexico is right on the Texan border, so they will get a lot of fans. But we always figure out a way to persevere when things are rough. So I am not going to say we can’t make it, but it will be very difficult.

“In the long scheme of things, we have a good shot of squeezing in, but we are going to need better preparation in order to do that, and we missed the last FIFA date, but we should have a camp in December before we go in January.”

However, Menzies said that the experience, exposure, and maturity the Girlz have gained since their participation in the Women’s World Cup has raised their professionalism, attitude, and focus. He says that they will have this in their favour going into the qualifiers.

“Most of them are professionals now,” he said. “I wasn’t in Jamaica, but based on [feedback] from the staff, they came with a different attitude. They are professionals. They have more confidence and purpose, so right now, they can go with the best of the best.”

Menzies said that he hopes that the ongoing impasse between him, his technical team, and the Jamaica Football Federation regarding monies owed to them does not prove to be a distraction to the team.

“I haven’t heard from the federation, and I am not going to reach out to them because they are the ones sending the message. But they [players] shouldn’t be in it for me. They should be in it for themselves. But there is no doubt we want them to qualify for the Olympics,” he said.

The qualifiers take place in Texas, USA, from January 28 to February 9.