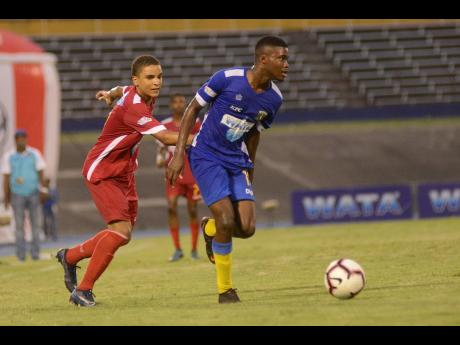 Striker Rodrick Granville flourished as he netted a double to lead Clarendon College into this year’s final of the ISSA/Champions Cup Knockout competition, after their comfortable 3-0 over victory over rivals and dethroned champions Cornwall College yesterday at the National Stadium.

They will face Kingston College in next Saturday’s final, after their 3-2 penalty shootout win over Jamaica College, following their 1-1 regulation time scoreline.

Granville netted his goals in 53rd and 68th minutes of the game for the Lenworth ‘Teacher’ Hyde-coached rural kingpins, while Tahjay Williams netted Clarendon’s third goal in the 88th minute.

Clarendon College, the defending daCosta Cup champions, will be playing in their first Champions Cup final.

“I am feeling happy that we are in the final because this is our second final that we are making this season,” said Hyde, whose team is set to face Dinthill Technical in the daCosta Cup final where they will aim to become the first team to successfully defend the title since Rusea’s in 2010-2011.

“This was our aim from the start of the season to be in both finals and so I am just hoping that we can complete the job,” Hyde added.

Clarendon dominated the first half, as they created a number of clear-cut chances. However, faulty shooting from their attackers let them down.

Granville, who tormented Cornwall’s defenders with his clever touches and off-the-ball movements, collected a through pass out of the midfield from Dane Chambers in the 10th minute, but with custodian Peter Sinclair at his mercy, his shot from 10 yards out went wide of the target.

You would have bet a house on Clarendon’s Jalan Larman giving his team the lead a few minutes later, but his weak right-footed effort from point-blank range flew high over the crossbar, as Cornwall College were again let off the hook.

The Clarendon players were much sharper than their Cornwall College opponents throughout the contest with their slick passing and quick movements carving out opportunity after opportunity against the champions. They squandered another scoring chance on the stroke of half-time when Sheldon Smart’s powerful shot from 12 yards went into the side netting.

Cornwall’s best scoring opportunity in the first half fell at the feet of midfielder Kamarli Powell, but his shot from 15 yards went straight into the hands of goalkeeper Prince-Daniel Smith.

However, Granville made up for his first-half miss when he put his team ahead seven minutes into second half, heading home a corner kick from Williams.

The stoutly built Granville doubled his team’s advantage in the 68th minute as he arrived in the centre of the 18-yard box to tap home into the back of the net. Williams wrapped up the victory for Clarendon two minutes from full time with an easy left-footed tap-in.