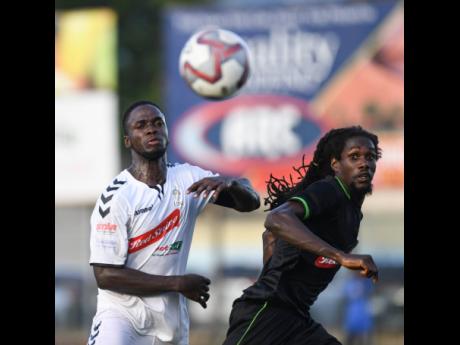 UWI head coach Andrew Peart has said that his players are starting to believe in themselves again. This is after the team’s results over the last few Red Stripe Premier League (RSPL) games, which included a come-from-behind 2-1 win over Molynes United at the Constant Spring field yesterday.

UWI, who climbed out of the relegation zone with yesterday’s win, won just one game in the first round and drew five, two of which were the last two matches of the round. Peart said that the last few games, in which they drew 2-2 with Harbour View and 1-1 with Humble Lion, show that the team has shown a never-say-die attitude to come away with results from games in which they were staring at defeat.

“We are finally getting into ourselves in terms of the belief and understanding that irrespective of what happens in the game, there is life and hope until the referee calls time.

“But can we do it again next week? That’s the thing.

“So we are looking to replicate this performance or make it better.”

Molynes were the better team in the first half and Fakibi Farquharson fired them into the lead in the 14th minute. But despite playing on the back foot for most of the half, UWI drew level three minutes later from Shuwayne Barrett’s well-struck free kick.

Zhelano Barnes snatched the win for the relegation strugglers seven minutes after the break, slotting home from the penalty spot, after Barrett was brought down inside the box.

Although UWI were the better side in the second half, Molynes had the better opportunities but could not make any of them count.

After winning their first six matches in the league, Molynes have now gone six without a win. However, coach Lijyasu Simms put yesterday’s defeat down to players not following instructions.

“It’s one of those days when players don’t follow instructions and we paid dearly for it.” he commented.

UWI are now 10th in the table with 11 points, while Molynes slipped to third in the standings, two points behind Mount Pleasant with their fifth straight win.