The show must go on! - Fight night at Sabina Park goes ahead despite rainfall 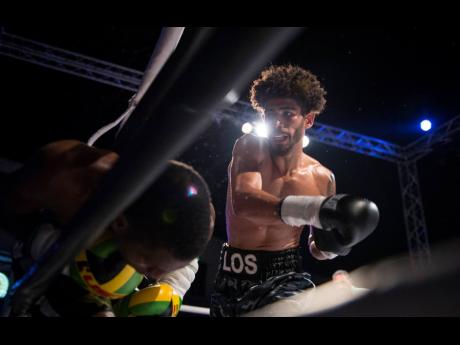 Gladstone Taylor
Carlos Dixon of the USA goes on the offence against Jamaica’s Toriano Nicholas during the WBC ‘Gloves Over Guns’ fight held at the Ambassador Theatre in Trench Town, Kingston, on Saturday, July 13.

A classic example that “the show must go on” was given at Sabina Park on Saturday night when, despite torrential rainfall, the international boxing show featuring fighters from Russia, the USA, Venezuela and the Dominican Republic took place before a small but enthusiastic crowd and a wide-ranging television audience.

Promoted by American company Uprising Promotions, led by Ronson Frank, with the assistance of Jamaican company Creative Sports and Entertainment, whose principals are Donald Lyew and John Isaacs, the Jamaica Boxing Board and the RJRGLEANER Communications Group, the four-fight international boxing card was scheduled to start at 7 p.m. Heavy rain started to fall at around 6:30 p.m. however, and with only brief breaks, continued until near midnight.

The go-ahead was given just before midnight, and the show started at 12:15 a.m. Three exciting bouts then followed. First up was the World Boxing Council youth world super featherweight contest between the USA’s Carlos Dixon and Edinso Torres of Venezuela. The action in this bout was fast and furious, but after holding his own for two rounds, Torres succumbed to the power punching of Dixon, and after only 39 seconds of round six, referee Peter Richards called a halt to the fight, with the concurrence of the Torres camp.

The 22-year-old Dixon, from Louisville, Kentucky, said afterwards that he was “elated at taking home the title”, and at 22 years of age, had the opportunity of defending the title for two years, and then stepping up to the senior division of his weight class. The age limit for fighting for the youth title is 24.

Next up was another title fight, for the regional World Boxing Association Fedecaribe title between Russian Yurik Mamedov and Eduardo Cordovez from Venezuela. In the early stages of this fight, both boxers traded punches equally, but Mamedov, the bigger of the two, soon showed his superiority. He hit Cordovez with some good body shots that obviously hurt, and although the Venezuelan tried hard, he was simply outfought and lost by technical knockout, when he failed to answer the bell for round four.

Mamedov was ecstatic after his victory and said that he would be defending his title soon. He hoped to be a good champion, and was going to work hard at becoming an ambassador for boxing on the world stage.

In the night’s final contest, Russian Vladimar Tereshkin kept his unbeaten record intact with a display of classic jabbing from a southpaw stance in his fight against the Dominican Republic’s Francisco Silvens.

Tereshkin towered over his shorter and heavily built opponent, who, because of visa and flight problems did not arrive in Jamaica until late Saturday afternoon. He occasionally surprised Tereshkin with punches to the head, and actually made his knees buckle after a furious flurry of punches in the second round.

There was no consistency, however, and the much taller Russian simply stayed at long range and fed him a diet of jabs, and an occasional left hook, to which he had no answer. Looking winded and hurt, Silvens did not answer the bell for round five. Tereshkin now has a 22-0-1 record, while Silvens suffered his first defeat in 24 fights.