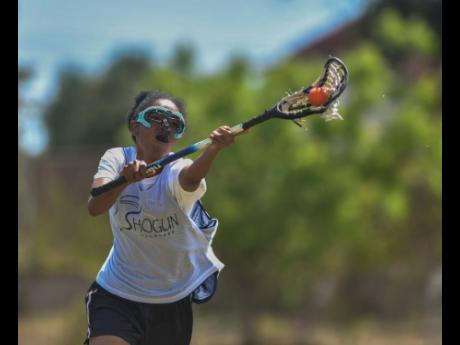 Gladstone Taylor
Johanna Silvera, one of the players on Jamaica’s senior women’s lacrosse team that made history in qualifying for the Women’s Lacrosse World Cup in Maryland, USA in 2021.

Head coach Karli Brentlinger was ecstatic about the accomplishment, praising her team’s perseverance.

“I think that’s the biggest thing that set us apart from the other teams and why we won against Mexico – because we just had grit,” she told The Gleaner. “Our girls just continued to fight, even though it was tied, and when we went into double overtime, they continued to fight and work hard. We hustled after every ground ball, and they just showed tremendous effort all around.”

The team was lead by outstanding performances from Kara-Jade Gordon, a senior at Monmouth College, who had 11 goals and one assist in the tournament and was awarded Player of the Match twice in two of the games in their tournament run; Syracuse’s Karen Haley-Silcott and Meltanique Bowen, who had four goals and two assists.

Brentlinger praised the performance of youth players Johanna Silvera and goalkeeper Shannen Graham, who were on the Under-19 team in Canada who impressed. Graham was awarded Player of the Match against Mexico, and Silvera was invited to play in a special all-star match on Saturdaythat will follow the Olympic rules that will be applicable for the 2028 Olympics in Los Angeles.

The achievement follows the Under-19 team’s historic appearance at the Under-19 Lacrosse World Championships in Peterborough, Canada, this summer. The squad, which comprised of those players and the more senior college players had wins against Colombia and Argentina on its road to securing qualification.

Brentlinger was pleased with the togetherness shown and is looking forward to the task of building a strong squad for the World Cup to be held in Maryland.

“We did an amazing job as a team, as a group,” she said. “We really came together over the last couple of days, and we were able to put some really great wins together in pool play and then came out with a third-place win against Mexico. I’m so proud of the team. We did an amazing job. We are really looking forward to 2021 and being able to put together an even more amazing team.”