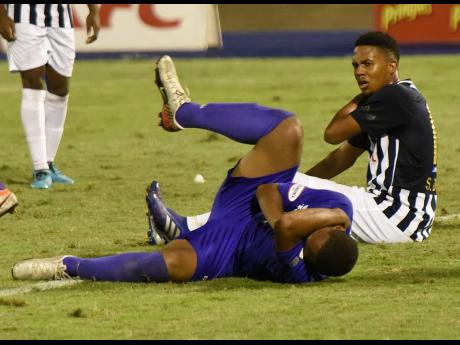 Ian Allen
Kingston College’s Khalifah Richards (left) goes down clutching his face after he was slapped by Jamaica College’s Shadane Lopez, who retaliated after being bitten on the shoulder during their ISSA/Digicel Manning Cup semi-final at the National Stadium in St Andrew on Wednesday night.

ISSA president Keith Wellington says that a decision will be made regarding possible further sanction for Kingston College’s Khalifah Richards and Jamaica College’s Shadane Lopez after a violent incident that took place in their Manning Cup semi-final game at the National Stadium on Wednesday.

In the latter stages of the second half, Richards was caught on camera biting into the right shoulder of Lopez, who retaliated with a slap to the KC player’s face. It is not clear whether the match officials saw the entire incident as it happened, as Wellington says he has not seen the match report, but the video has gone viral on social media.

When contacted yesterday, Wellington said that ISSA’s disciplinary panel would decide by the end of the day whether to take further action. However, when contacted moments before press time, he said a decision was still not reached as yet.

Jamaica College went on to defeat Kingston College 5-4 on penalties to advance to next week’s Manning Cup final after the game ­finished 1-1 in regulation. Lopez may be in danger of missing the final depending on ISSA’s impending decision. Richards also faces an anxious wait as his availability for this afternoon’s ISSA Champions Cup final against Clarendon College is in doubt.

Wellington also said it is unlikely that St Andrew Technical High School will face any sanctions for a field invasion by their fans celebrating their win over Wolmer’s Boys in the earlier match of the double-header. STATHS advanced to their second final in three years, defeating Wolmer’s on 4-2 on penalties after the game finished 1-1 in regulation time.

He also assured that ISSA will exercise vigilance to ensure that another incident such as this field invasion does not repeat itself.