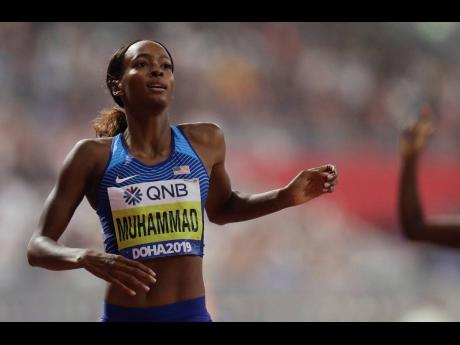 Jamaican sprinting star Shelly-Ann Fraser-Pryce missed out on a second World Athletics Female Athlete of the Year award, as US hurdler Dalilah Muhammad and pioneering marathon runner Eliud Kipchoge walked away with the female and male awards, respectively, at a ceremony in Monaco yesterday.

Young Jamaican sprint hurdler Brittany Anderson, the world under-20 record holder in the 100m hurdles, received a plaque for her achievement, but also missed out on the Rising Star of the Year award.

2013 recipient Fraser-Pryce, who along with Merlene Ottey, who won in 1990, are the only two Jamaican women to win the Female Athlete of the Year award, won gold in the 100m at the World Championships in Doha, Qatar, this year and ended the season as the joint fastest woman in the 100m with a best of 10.71 seconds.

Meanwhile, Muhammad, who was favoured to win the award after winning gold in the 400m hurdles at the World Championship in a world record time of 52.16 seconds, was extremely grateful for the award.

“It’s been an amazing year. I’m so thankful to be here,” said Muhammad, who had earlier broken the world record at the US National Championships with a 52.20 clocking.

Kipchoge became the first man to run a sub-two-hour marathon, though the feat wasn’t officially recognised as a world record. That’s because he ran on his own, with a rotating group of pacemakers and in strictly controlled conditions. Kipchoge’s only competitive race this year came when he won the London Marathon in April.

“I am happy to be the first human being to run under two hours. I hope that I inspired a lot of generations,” Kipchoge told the awards ceremony via video link.