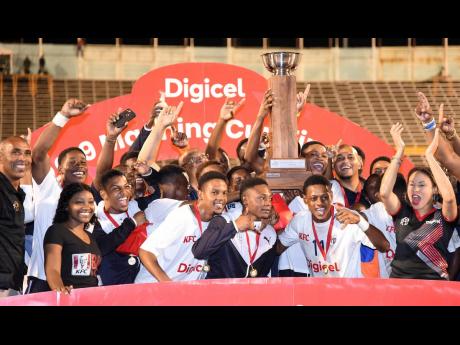 It only took a year, but the colours of dark blue rule urban schoolboy football again.

Jamaica College (JC) captured their 30th ISSA/Digicel Manning Cup title, defeating St Andrew Technical High School (STATHS) 5-4 on penalties in the final at the National Stadium yesterday. The win returned JC to the throne room, after their five-year bullying of the league between 2013 and 2017 was interrupted by Kingston College last year.

Tajay Grant slotted home the winning penalty with the final kick in the fifth round of a shootout that followed a 0-0 regulation time scoreline, to bring the title back to Old Hoad Road, after substitute goalkeeper Tarique Barrett foiled STATHS’ Tyrese Smith’s tame fifth round attempt.

JC head coach Davion Ferguson was ecstatic for the win, as he captured the trophy in his first season as head coach, matching Miguel Coley’s feat in 2013.

“It’s an exciting feeling. We started out to accomplish this. These players are champions,” he said after the game. “We were the first team to limit STATHS, not just to one chance, but not scoring and credit must be given to the boys for that.”

It was the second time in three years that the two schools met in the final and again it brought heartache for the Bumper Hall-based school, which is forced to continue its wait to end a three-decade drought for the title.

The ‘Dark Blues’ were all over STATHS in the opening minutes, putting the STATHS backline under siege. STATHS goalkeeper Ricardo Laing was forced into an early save in the first 10 minutes, as his team clinged to dear life at this point.

Phillon Lawrence played a beautiful pass to Shadane Lopez, who managed to lob the ball over Laing after being played through on goal, but his effort went over the bar.

STATHS weren’t able to generate a shot in the entire first half. The closest they came to troubling JC was when their goalkeeper Daniel Russell fumbled a free kick delivery that a JC defender cleared.

STATHS, however, started the second half brightly and asked several questions of the JC defence. They thought that they were ahead 12 minutes into the second half when Romario Campbell got on the end of a low cross and tapped the ball past Russell, but JC managed to clear the ball before it trickled over the line.Both teams had chances to win in regulation time. None could make it happen.

JC’s Lawrence saw his free kick sail over the bar in the latter stages and STATHS weren’t able to make do with their opportunities.

In the ensuing penalty shootout, both teams were perfect through four rounds, but Smith’s attempt was foiled by Barrett, who came on as a substitute in the latter stages of regulation.

Grant became the hero as he fired home his final kick much to the joy of their supporters in the stands, as JC extended their position as the most successful team in the competition.