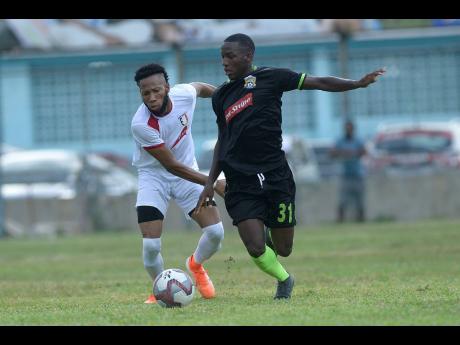 It could be a case of back to the future tomorrow afternoon, when coach Calvert Fitzgerald leads Molynes United out to face Humble Lion FC in the Red Stripe Premier League (RSPL).

Fitzgerald, who had a three-year stint with Molynes United prior to earning promotion to the RSPL, was brought to replace Lijyasu Simms, who quit midweek citing interference and internal squabbling.

Prior to Simms’ departure, Molynes started their RSPL life with a bang, winning their first six games before stumbling to a draw with Harbour View in their seventh game. Their following seven games only produced one point, as they had six losses and one draw to slip from first to fourth with the prospect of slipping even further.

“They have found themselves without a coach and they asked me to help and seeing that I was not coaching a club side at the time, I decided to help,” Fitzgerald said of his decision to r-join his former team on a rescue mission.

This assignment will take Fitzgerald to six clubs in the RSPL, having rescued Waterhouse from relegation in 2002. He also had stints with Olympic Gardens, Tivoli Gardens as well as August Town and Rivoli United, both of which he qualified. While he is used to the atmosphere in the League and at the club, he starts today a little in the dark.

“I do not have much information.

“Basically, I have not had a lot a time to do much. I got together with them the first time this morning (yesterday) so I have to put a team together to get a result. The real work starts on Tuesday,” Fitzgerald stated.

The situation at Molynes United could be perceived as the perfect opportunity for opposing teams to get the better of them but Humble Lion’s Andrew Price has a different focus.

“We will not be distracted by what is going on at Molynes United,” said Price, who took the reins of the Clarendon club in the off season.

“Our concern is to give of our best so that we get the best possible results and that will not change. The fact that they got promoted to the League and did as well as they did when they started suggests that they have quality and were doing the right things, so they have to be regarded,” he added.

Humble Lions have earned just one point from their last two games after losing at home to leaders Waterhouse and drawing away with Dunbeholden FC.

At the Harbour View Stadium, the sixth-placed home team will be hoping to continue their points accumulation when they host Cavalier after ending a two-game slide with a win over Molynes FC. This could be a tough one for Harbour View, as their opponents Cavalier are coming off a big win over bottom of the table Vere United.

Spanish Town Prison Oval should be rocking with the St Catherine derby featuring eighth-placed Dunbeholden FC taking on their more fancied opponents and defending champions Portmore United which have the same number of points, but sit a place below because of an inferior goal difference.

Tivoli Gardens will probably not want to see leaders Waterhouse at this time with the wound of their 0-4 thrashing at the hands of Mount Pleasant FA still fresh. They could turn form on its head in a fashion similar to what they did on Monday when they outclassed neighbours Arnett Gardens.

The last time Vere United played at home they had a healthy 3-0 win over Molynes United and memories of that could inspire them against 10th-placed UWIFC and help to erase the memories of that massive loss to Cavalier midweek while UWIFC will be looking to rebound from their loss to Arnett Gardens.