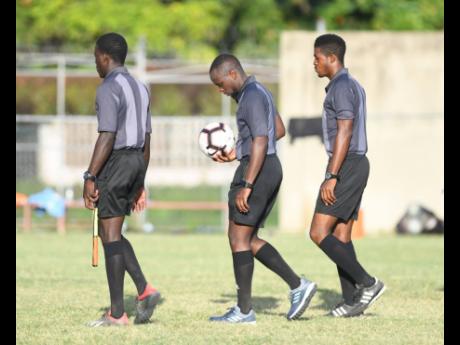 Ricardo Makyn
The Red Stripe Premier League game between Portmore United and Dunbeholden was delayed for 20 minutes because only three of the four assigned officials, pictured here, arrived on time at the Spanish Town Prison Oval in St Catherine yesterday.

He says miscommunication regarding the confirmation of payment of fees owed to them led to 10 officials not showing up for yesterday’s fixtures, which included the postponed Tivoli Gardens-Waterhouse game at the Edward Seaga Complex.

But Stewart said that the referees were paid, although late.

“The PLCA (Premier League Clubs Association) had met the obligation, however,” Stewart told The Gleaner. “The PLCA was late in their payment, but they did make their payments, and we have to give them kudos for that.”

He confirmed that alternative officials were despatched for the game to be played as planned.

“Some people take it up on themselves and decided not work today,” Stewart said. “The fact is at least 10 people pulled out on me. I had to full out with some replacements. By the time I realised that the referees who were assigned did not honour their appointments, I tried to find replacements. They reached the game at 3:20 p.m. At 3:30 p.m., the commissioner decided to call off the game.”

Stewart said that the fixture between Arnett Gardens and Mount Pleasant will be played as planned at the Anthony Spaulding Sports Complex tonight at 8:35 p.m. He said that he does not anticipate any further interruptions with subsequent fixtures.