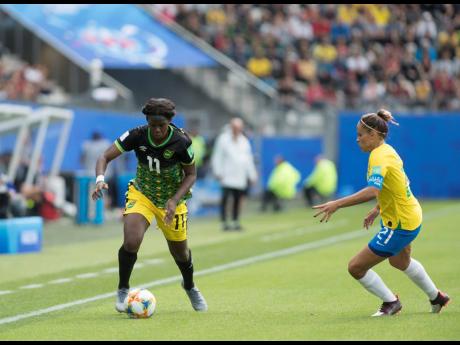 The call comes after the 22-year-old Reggae Girlz star striker was named among the 100 Best Female Footballers in the World for 2019 by British newspaper The Guardian yesterday.

Wint said that the federation had submitted her name for consideration; however, she was not among the nine nominees announced last Thursday.

“I truly believe that she should be one of the candidates going forward,” Wint told The Gleaner. “As a matter of fact, we had nominated her from our end. We submitted her name, but unfortunately, she wasn’t shortlisted for Sportswoman for the year.

“We do understand the criteria that was taken for the other contenders, but based upon her performance, albeit most of it came later in the year, I think she should be one of the persons chosen.”

Shaw was ranked No. 80 on The Guardian’s list, with the publication’s assessment crediting her strong start in the Women’s French League with Bordeaux and her role in Jamaica’s historic appearance at the 2019 FIFA Women’s World Cup.

“She scored four goals in two games during Jamaica’s warm-up friendlies, and since going professional in Division 1 Féminine with Bordeaux, Shaw has rarely looked back. Nine goals already this season leave her trailing only Ada Hegerberg in the scoring charts, and it does appear the world is really at her feet at 22,” the publication notes.

Nine women, headlined by four-time world champion Shelly-Ann Fraser-Pryce, have been nominated for the award, with the winner set to be announced on January 17, 2020. All but one of the nominees hail from athletics.

Wint hopes that the selection committee will reconsider Shaw’s non-selection to the list of nominees.

“I have seen where they have done that before, so I’m hopeful that they reconsider Khadija as one of the nominees for sportswoman of the year,” Wint said.

The same sentiments were expressed by coach Hue Menzies, who guided the country towards its historic qualification to France. He said that he was shocked that Shaw’s name was not included.

“There should be a rethink. There is no other person ever to score that many goals for Jamaica, and she has taken us to a World Cup, put us on the map. If that’s not somebody that people need to look up to and respect, then it definitely deserves a rethink.”

When contacted yesterday, chairman of the RJRGLEANER Sports Foundation’s Selection Committee Mike Fennel pointed to the criteria for selection and stated that a decision to add the striker would have to be made with the other members of the committee.

“The big question is the criteria used for selection, which is based on actual performance,” he told The Gleaner.

Last year, netballer Shamera Sterling and track athletes Hansle Parchment and Shericka Jackson were added to the list of nominees subsequent to the original announcement, with the organisation noting that the additions were made following further research.

Shaw has been in top form since signing for Bordeaux in June, scoring nine goals in 10 appearances, including four goals in her last three games. Only Olympique Lyon’s Ada Hegerberg, last year’s Women’s Ballon d’Or winner, has scored more goals so far this year 11.

2018 RJRGLEANER Sportswoman of the Year Nominees

2018 RJRGLEANER Sportsman of the Year Nominees