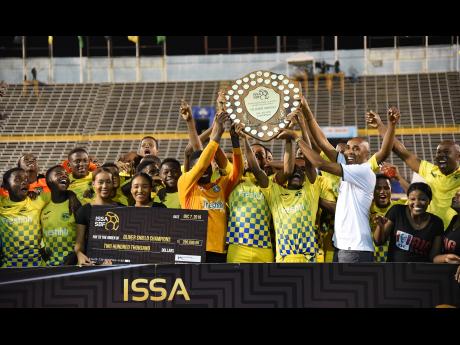 Clarendon College football team celebrating after they were presented with the Olivier Shield trophy by Keith Wellington (right), president of ISSA, after they defeated Jamaica College on penalties to lift the title.

Clarendon College can now celebrate to their heart’s content.

The back-to-back daCosta Cup champions retained their Olivier Shield in dramatic fashion, defeating Manning Cup champions Jamaica College (JC) 4-1 on penalties after drawing 1-1 in relegation time, after a lengthy delay in the first half.

André Nicholson netted the decisive penalty in the fourth round, ensuring that the symbol of all- island supremacy remains in rural territory for another year.

JC’s Oquassa Chong thought he had found the winner in the final minutes of normal time after tapping home from close range, but CC’s all-action goalkeeper, Prince-Daniel Smith, equalised, with mere seconds left in stoppage time.

“It means a lot. Just hard work and sacrifice. I lift my hat to the players. They are the ones that did it. The discipline we instill in these players, I think that’s why we won it,” said Hyde.

There was a bit of drama at the other end of the contest as well, as play was stopped in the 26th minute due to lighting issues at the stadium, with the floodlights failing to come on due to a power outage in the area.

Jamaica College goalkeeper Daniel Russell indicated to referee Veralton Nembhard that he could not see the ball, resulting in the players being called off the field. The delay would last over 40 minutes before the flood lights came on at 6:15 p.m. with play resuming five minutes later.

JC’s Omar Thompson had the first chance of the game in the 10th minute, as he was allowed space to fire a shot from outside the area which went wide.

CC had their first attacking move of the game shortly afterwards when Roderick Granville combined with David Chambers before getting off a shot that was blocked by the JC defence.

They got another opportunity soon afterwards when fullback Omar Reid continued his run in the middle of the park before unleashing a shot that could not find the target. Jahien Rose his effort clear the bar in what was the last action before the stoppage.

Jamaica College showed more urgency after the delay and sought to get behind CC’s backline but couldn’t generate clear cut chances.

The second half was more of a physical battle, with both teams struggling to create opportunities and both giving away possession cheaply. Despite having a better spell of possession midway through the second half, CC, couldn’t find the cutting edge that led them to success all season.

However, JC had their moment in the 83rd minute when substitute Tajay Grant did well to win the ball from a CC defender on the right-hand side, and his low cross found Issac Scott, who just came on, but his one-time effort went over the bar.

Chong got his moment when he fired home a loose ball, thinking that the title was theirs, but Smith advanced to the box for CC’s final corner, which he bundled home after an error from his counterpart, rescuing the day for his team.

JC missed their first and third penalty kicks, while CC were perfect throughout to ensure that the shield returns to Chapleton.

Jamaica College head coach Davion Ferguson congratulated CC for their victory and praised his team for a good season.

“First and foremost, I want to say congratulations to Clarendon College. They are an excellent team, very offensive.

We managed to stop them for most of the game. [My team] are youngsters, and they will have to learn from this. But credit must be given to my team because we came out here when no one gave them any chance and we fought,” said Ferguson.