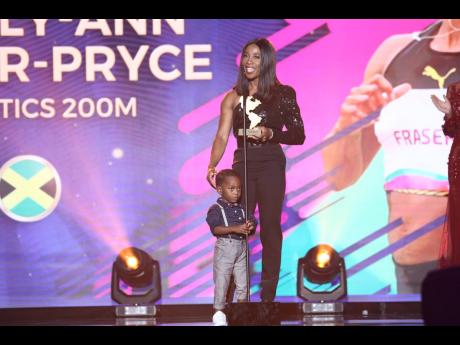 Contributed
Shelly-Ann Fraser-Pryce poses with her son, Zyon, after receiving the Best Female Athlete award at the Panam Sports Awards in Fort Lauderdale, Florida, on Friday.

Jamaican sprinter Shelly-Ann Fraser-Pryce walked away with the Best Female Athlete award at the first-ever Panam Sports Awards ceremony, which was held in Fort Lauderdale, Florida, on Friday.

Fraser-Pryce, who won gold in the 200m at the Pan Am Games in Lima, Peru, earlier this year in a championships record 22.43 seconds, capped off an extremely positive year that also saw her win gold in the 100m and 4x100m at the World Championships in Doha, Qatar.

The ceremony was staged to celebrate the performances of athletes from the 41 countries that make up the Americas region at the Pan Am Games and featured a month-long public competition that sparked fierce rivalries between some of the greatest athletes of the region as sport fans from across the continent voted for their favourite athletes and favourite moments of the Games.

Fraser-Pryce thanked the organisers for the acknowledgement.

“It’s always a fulfilling experience for an athlete to be recognised for their efforts and hard work. I would like to first applaud the Panam Sports Committee for making the decision to host this first edition to honour the athletes of the 41 countries who are members of the Americas,” said Fraser-Pryce through a post on social media.

“I’m extremely grateful my performance was considered along with all the athletes being recognised as one of the most inspiring moments at the Pan Am Games held earlier this year in Lima, Peru,” Fraser-Pryce added.

Argentina’s gold medal winning men’s basketball team walked away with the Best Male Team award while the country’s women’s hockey team got the Best Female Team award for their undefeated run to the gold medal.