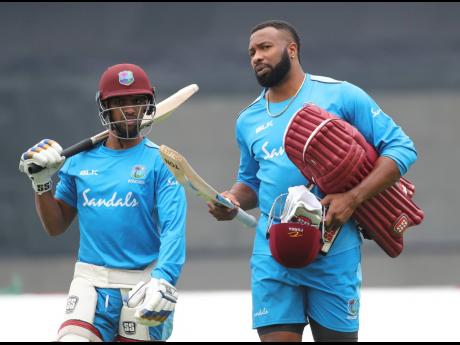 AP
West Indies’ captain Kieron Pollard (right) and Nicholas Pooran walk to bat in the nets during a training session ahead of their first One-Day International cricket match against India, in Chennai, India, yesterday.

West Indies face India in the opening One-Day International (ODI) today, once again aware of their status as underdogs but armed with “a clear plan” on how to produce an upset in the three-match series.

They are without a series win against India in 13 years, without a series success on Indian soil in nearly two decades and have won just four of the last 21 bilateral ODIs against the subcontinental powerhouses.

And despite their whitewash of Afghanistan in a similar three-match series last month in Lucknow, captain Kieron Pollard said India presented a completely different challenge and the task before his side was to stay focused and execute.

“So there’s a process, there’s something we’re actually going through and as I have said, the results might not show straight away. Yes, we won 3-0 against Afghanistan but we’re coming up against better opponents – not saying that Afghanistan is a bad opponent … they have world-class cricketers in their bowling line-up and batting line-up as well.

“But it’s a matter of us focusing on what we need to do going forward. Again, there are things internally that we’re working on and, hopefully, the runs and results will take effect in time to come. Obviously, it’s not going to happen overnight but we’re willing to work and at the end of the day, where it takes us, it takes us,” said Pollard.

He added: “We’ve sat and discussed how we want to play this format as a team and the guys are aware of their roles and responsibilities and again it’s a matter of them going out and executing their roles.”

West Indies will look to key players in the squad for match-winning efforts, especially based on recent performances.

Against Afghanistan, stroke-maker Shai Hope gathered 229 runs at the same average, highlighted by an unbeaten hundred and unbeaten half-century while off-spinning all-rounder Roston Chase averaged 72 and led the bowling attack with six wickets.

And Pollard believes Chase, in particular, can be a key player against the Indians, especially with the all-round qualities he brings and having played Test cricket extensively.

“First of all he’s a Test batsman – he has Test hundreds – so that in itself is a great asset for us, having a guy who bats in the middle order in Test cricket coming in and playing any role,” Pollard explained.

“And given that he can bowl as well, gives us another opportunity to play an extra bowler or an extra all-rounder or an extra batter as well so he’s been very valuable for us. We saw his talents and we’re trying to exploit [them].”

Pollard said it was important for these inexperienced players to focus heavily on their preparation for international matches.

“For the younger guys in our team, it’s about changing your training habits and being more focused on what you want to do and what you want to achieve and putting more into your game,” he stressed.

“I’m not saying guys have not done it – guys have done it … sometimes results do not reflect but sometimes you need to do the extra and … I’m really excited about this bunch of guys we have because these guys are really putting in the hard work behind the scenes.”