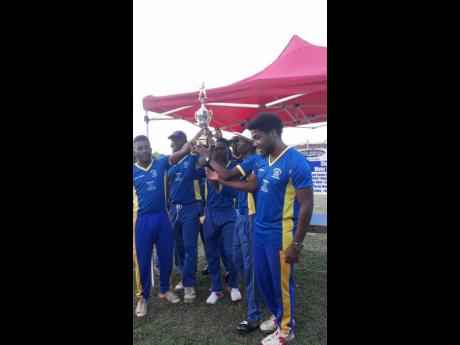 Contributed
Boscobel celebrate with their St Mary Premier League T20 title after beating Port Maria in the final at the Boscobel Oval, in St Mary on Thursday.

National under 17 all-rounder Oshane ‘Ginger’ Ennis was named Most Valuable Player of the League, while St Mary parish batting stylist Orlando Lyons was the top runs scorer with 280, and Ronald Gooden top wicket taker. The feature match saw Boscobel taking first strike, but their much vaunted batting line up could only muster 137 off 18 overs. Ronald Gooden, 29, Eugene Hudson, 28, Maurice Harrow, 19, and national representative Alwyn Williams, 16, were the main scorers, while Gihon Murdock, three for 29, and Toussaint Hassan, three for 29, were the main destroyers for Port Maria.

In their turn at the crease, the highly-rated Port Maria team, including national representative Aldane Thomas, were skittled out for 86 off 15 overs and five deliveries. Thomas top scored with 27, but only Devoy Smith, 15, and Andre Creary, 12, made any other worthwhile contribution. Gooden, three for 11, Daniel Ricketts, two for 15, and national under 17 representative Andel Gordon, one for 20 were the top bowlers.

“Cricket in St Mary is on a high right now and we want to keep the momentum going into 2020,” Spencer told the large crown on hand. “After winning the Jamaica Cricket Association (JCA) 50 Overs title, reaching the semi-finals of the JCA T20 Bash and our Under 15 reaching the Kingston Wharves final, we have set the bar pretty high and it’s now up to our players to continue improving their game.”

Spencer outlined a plan for sustainable development for the parish including the Jeff McKitty 35 Overs in January, and a training programme for all primary schools taking part in next year’s JCA Primary School League.

Port Maria mayor Richard Creary, in bringing greetings, said he’s pleased at the standard of the competition and its role in the development of St Mary’s Cricket.