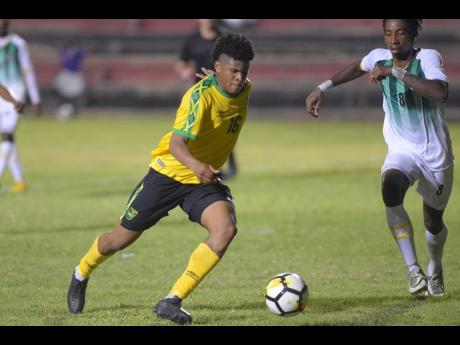 File
Jamaica’s Nicque Daley (left) dribbles forward as Dominican defender Jolly Fitz looks to close him down during their Concacaf Men’s Under 23 Olympic Qualifying match at the Anthony Spaulding Sports Complex in Kingston on Wednesday, July 17, 2019. Daley was a member of Jamaica’s Under 22 team that went down 9-0 to Japanese counterparts in the Kirin Challenge Cup in Nagasaki, Japan on Saturday.

Jamaica’s football fraternity is still reeling from the 9-0 mauling the national under-22 team suffered at the hands of their Japanese counterparts in their Kirin Challenge Cup match at the Transcosmos Stadium in Nagasaki, Japan on Saturday. The Young Reggae Boyz, who were 5-0 down at the break, were outclassed and tasted Jamaica’s men’s team’s highest ever defeat at any age group level.

However, former national player and youth coach, Lenworth Hyde, who led Clarendon College to back-to-back DaCosta Cup and Oliver Shield titles this season, does not believe the result was any fault of the team’s.

He says Jamaica’s youth teams are not being properly prepared and the Jamaica Football Federations (JFF) need continuous camps for Under20 (U20) and Under23 (U23) teams, to help young players leaving school to make the transition into professional and international football.

“How can we get 9-0,” Hyde asked. “This is one of our better crop of youths. Our best set of youths. It left a bad impression on our programme. But you have to have these players training regularly, as they leave Manning Cup. You can’t just pick a side and throw them into situations against players who are professionals for a long time.

“We must have teams in training every time. We should have the best U20s and U23s in camp training. We must have schedules for all [international] competitions and matches, and prepare. You can’t just go into a game to play and expect to play well. It’s all about preparation and we are not preparing for these competitions and these games.

“If we want to reach that level, we have to spend money. We have to have programmes in place and give the kids proper training right throughout. There should be no rest between schoolboy football, under-20 and under-23 and that is what’s happening.”

Hyde blames the Red Stripe Premier League, the nation’s highest football division, for some of the deficiencies in its national teams.

“We need to learn to defend against these teams,” he said. “But our league not helping. No football is being played in the Premier League. So the transition from schoolboy to the international and professional level is poor. The fields that we play on, and type of football we are playing is like ‘war’. Players are trying to hurt each other but no football is being played.”

Although the defeat to Japan was very disheartening for Hyde, believes Jamaica has talented players, and he hope this defeat gives local football administrators a wake up call to the realities and demands of high level football.

“It has dampened our spirit,” he said. “The whole Jamaica programme got hurt. This team (Japan) went with us to the 98 World Cup (for the first time). But they have gone far ahead of us so we have to get serious.

“This hit us in our face and is a wake up call to see we are nowhere. But maybe it is a blessing in disguise for the JFF, to let them know they must have teams in training with good coaching staff. We can’t go into any more match or tournaments like that.

“Also I don’t know the players’ mentally, but you send them away at Christmas, so they wouldn’t be in any vibes to play any football.”